A RixShadingContext encapsulates a shading context - a description of the environment in which shading is to be performed. It is the primary domain of operation for the shader classes RixBxdf, RixDisplacement, RixLight,  RixPattern, and RixVolume, and is also of high importance to RixIntegrator. Implementors of these classes and their associated plugins will thus need to be intimately familiar with the RixShadingContext class.

A  RixShadingContext usually represents a collection of one or more geometric points that may be shaded. The group of points may arrive via ray tracing hits on geometry, or may be associated with tessellated micropolygons. In either case, shaders will make use of the shading context primarily in one of two ways: inquiring about geometric information through the GetPrimVar() and GetBuiltinVar() methods, and evaluation of the input parameters to the shading function is provided via the EvalParam() methods.

A RixShadingContext contains several fields that will be filled in by the renderer or integrator and may contain useful information pertinent to shading computations. For all shader types, this information should be considered read-only, which is enforced through the use of a const RixShadingContext. RixIntegrator plugins may be required to fill in some of these fields through the course of their operation.

Builtin variables represent values which are usually always present for all geometry types, and are often used in fundamental shader calculations. Some variables like P, the shading position, and Nn, the normalized shading normal, are derived from the geometry definition. Others like incidentRaySpread and VLen are derived from the incoming rays or from a combination of the geometry definition and the incoming rays.

Builtin variables may be queried using the GetBuiltinVar() method. The BuiltinVar enumeration is used to select one of the following variables:

BuiltinVar must be passed a pointer to a pointer of the appropriate type for the variable. The returned pointer points at const storage containing the value of the variable, one value for each point in the RixShadingContext. This storage is owned by the renderer and is valid for the duration of the shader execution.

For normal shading contexts, SetBuiltinVar() is a no-op. Shaders that wish to change the values of builtin variables will need to create a mutable shading context. 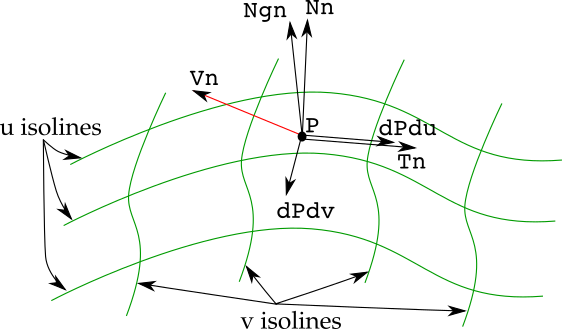 The following diagram illustrates the incidentRaySpread and incidentRayRadius properties of the ray which are related to ray differentials, and are important to the computation of filter widths for antialiasing.

The next diagram illustrates an incident ray and potential reflected rays and transmitted rays that may be returned by a Bxdf as the next indirect ray fired by an integrator. Here, the green lines represent a side view of the tessellated micropolygon geometry. Note that the geometric normal Ngn and the micropolygon size mpsize is derived directly from the tessellated representation, while the biasR and biasT variables can be used to bias the origins of the indirect rays. 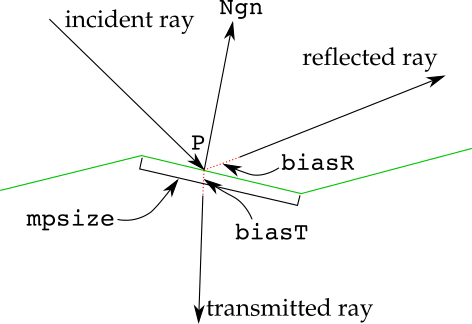 Primitive variables (often referred to as primvars) represent values which may be optionally present on the geometry. These primvars are uniquely named and may be supplied with the geometry definition. Shaders are usually written knowing the name and data type of certain primvars in advance, such as texture coordinates. However, since the primvars are optional, shaders are expected to fail gracefully if the primvars are missing.

The first variant of GetPrimVar() can be used to efficiently query the existence, type, and array length of a primvar. The other variants return a pointer to const storage containing the value of the primvar in the var output parameter, if the primvar exists. If the primvar cannot be found, storage will still be allocated and will be filled with the value of the input fill parameter. The optional radius output parameter if supplied will point at storage containing the approximate isotropic filter radius associated with the primvar. This value is computed by the renderer from the ray differentials and can be used to perform any necessary shader antialiasing.

There are also variants of GetPrimVar() which return the partial derivatives of the primvar measured with respect to the builtin variables u and v. These methods may be used in certain conditions that are otherwise hard to filter correctly.

For normal shading contexts, SetPrimVar() is a no-op. Shaders that wish to change the values of primitive variables will need to create a mutable shading context.

Primitive variables of type RtFloat3 and RtMatrix4x4 are automatically transformed and returned in current space, which is generally considered the optimal space for the renderer to perform operations. Plugin authors should make no assumptions about what current space actually maps to, and should transform such primvars from current to another space if required using the transformation routines.

If the value cannot be obtained from the shading network or from the direct parameters associated with the shader invocation, the result will be filled with the default value provided in dflt.

Depending on whether the input parameter is the default value, or a constant value or a connection, the call to EvalParam() will either return a pointer to storage containing a single value or an entire numPts worth of values. This can be changed by setting the optional parameter promoteToVarying to be true, in which case the storage for the result will be guaranteed to be an entire numPts worth of values; however, this does not alter the return value. This storage is allocated by the renderer and has a lifetime associated with the shading context; it does not need to be managed by the caller.

The return value of EvalParam is a value of RixSCDetail: k_RixSCUniform indicating that the input parameter was uniform (a constant or default value) or k_RixSCVarying indicating the parameter was varying (a connection). If the value cannot be found (typically because it does not have the correct matching type, i.e. the wrong version of EvalParam was used) then k_RixSCInvalidDetail will be returned.

Some examples for reading different types of input parameters are shown below.

RixShadingContext provides a fast memory allocation service tailored to shaders that need to execute quickly. The main provider of this service is the Allocate() routine; the New() routine and the class Allocator are wrappers around Allocate(). The backing store for this memory allocation are memory pools which are tailored specifically to the lifetime requirements of RixPattern and RixBxdf, with the latter category equating to the lifetime of the RixShadingContext. Clients that use these memory management services should use "placement new" semantics, and should not rely on the invocation of a destructor.

RixShadingContext provides a limited service for tracing rays. The GetNearestHits() routine allows shaders to trace rays to determine the nearest hit. These rays do not trigger shading on the hit geometry, and should thus be considered geometric probe rays: the only information that can be returned from GetNearestHits is a RtHitPoint struct, which contains a minimal set of geometric information including the distance, the P, Ng, u, v builtins of the hit geometry, and the filter and micropolygon sizes. A ray that missed is indicated by the distance being set to 0. While limited, this service is sufficient to allow for calculation of effects such as ambient occlusion. This service should not be confused with the RixIntegratorContext ability to trace rays, which is provided only to implementors of RixIntegrator.

Transformation of RtFloat3 data between two coordinate systems known to the renderer can be accomplished using the Transform() method. The interpretation of the RtFloat3 data as point, vector, or normal data is specified using the TransformInterpretation enum. The array of data must be numPts in size and the data will be transformed in place. A non-zero return value indicates a failed transformation, typically due to unknown coordinate systems being specified.

In addition, transform matrices between two coordinate systems can be returned directly via the GetTransform() method. The matrix output parameter points at storage allocated by the renderer containing the matrices. The size of this storage is indicated by the numMatrices output parameter. If the transformation is time varying, the numMatrices returned will be the same as numPts. If the transformation is uniform, numMatrices will be set to 1. A non-zero return value indicates a failed transformation, typically due to unknown coordinate systems being specified.

As long as the RixIntegrator used supports the appropriate ray property query, plugin authors may want to query ray properties such as the ray depth or eye throughput, in order to allow for artistic control or optimization. For instance, as an optimization a RixBxdf may want to skip the evaluation of a particularly expensive lobe, if the current ray depth of the hit point is beyond some arbitrary threshold. This service is provided by the GetProperty() routine on the RixShadingContext. Callers of this routine are responsible for allocating and deallocating the result memory.  The integrator is responsible for filling in the result. Below is a code snippet demonstrating how to use this feature.