A lot of aspects of RenderMan for Blender (RfB) such as defaults and labels can be customized using JSON (.json files).

Environment variables can be set using an rfb_envvars.json file. This file is automatically read on start up from the user's config directory (see: Blender's documentation). Note, this method cannot be used to set any standard Blender environment variables, including OCIO.

An example of the format of the file:

Advanced: if you would like RfB to ignore the rfb_envvars.json, set the environment variable RFB_IGNORE_ENVVARS_JSON to 1

Each environment can also contain multiple, color-separated, paths (on Windows, these are semi-colon separated paths).

You can also specify a config path in the RenderMan for Blender preferences, under the Advanced section (requires restart).

The properties in some RenderMan panels can be configured to use different defaults. Here's an example.

"name", should be the name of the configuration we are interested in overriding (in this case it's the scene properties). "params" should follow name. In our example, the first property is an existing one and we are overriding the label, the default, and the description. If we are adding a new property, we also need to specify which panel this property should be drawn in; in this case we want to add it to the scene's custom options panel. This example also shows how we can add a RenderMan user option. Note, the name of the json file itself in this case does not matter; as long as the first "name" matches an already known configuration it will work. Here's what the result should look like after applying the above override: 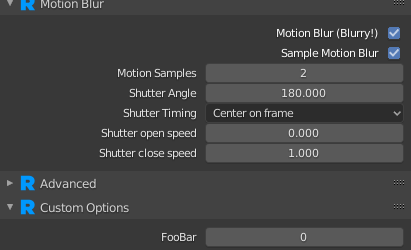 As you can see, the label for Motion Blur has changed along with its default. There is also a new FooBar user option under Custom Options.

To get a list of configurable panels, you can run the following code in Blender's Python console:

We can also the override the defaults of any of RenderMan's shaders (bxdf's, patterns etc.)  Here's an example where we override parameters in PxrEnvDayLight:

Finally, we can also add custom display channels that can be used in AOVs. Note, the name of this JSON file does matter; it must be named: rman_dspychan_definitions.json. Here's an example where we add a new channel called MyAOV.

You can also add your own custom shaders by using the environment variables RMAN_SHADERPATH for OSL shaders and RMAN_RIXPLUGINPATH for C++ shaders. For the latter, an accompanying Args file is required.

, under the Templates menu. 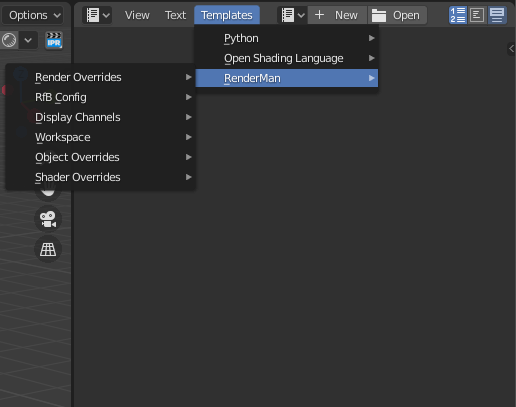