Cameras provide a number of interesting effects in RenderMan for Maya.

In previous versions of RenderMan, the image plane is implemented as a piece of geometry with PxrConstant applied to it. For RenderMan to project the image onto the geometry, txmake needs to distort the non-square input image (.png) into a square texture (.tex). This allows the image plane texture to be directly mapped onto the image plane geometry. The txmake command looks something like this:

RenderMan currently implements image planes as a PxrImageDisplayFilter SampleFilter plug-in. In this case, it's important that txmake generates an undistorted texture (.tex) from the non-square input image (.png) so that the sample filter can project it properly. The txmake command looks something like this:

Legacy behavior can be achieved by disabling the Image Plane As Sample Filter option under Advanced render settings. 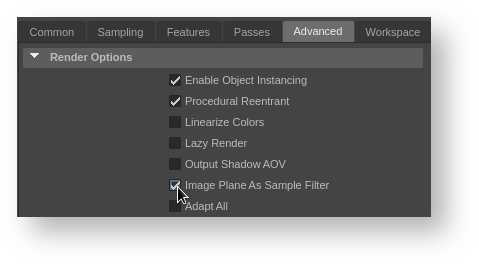 You must disable the Image Plane As Sample Filter option in order to use a pattern plug-in as your image plane color.