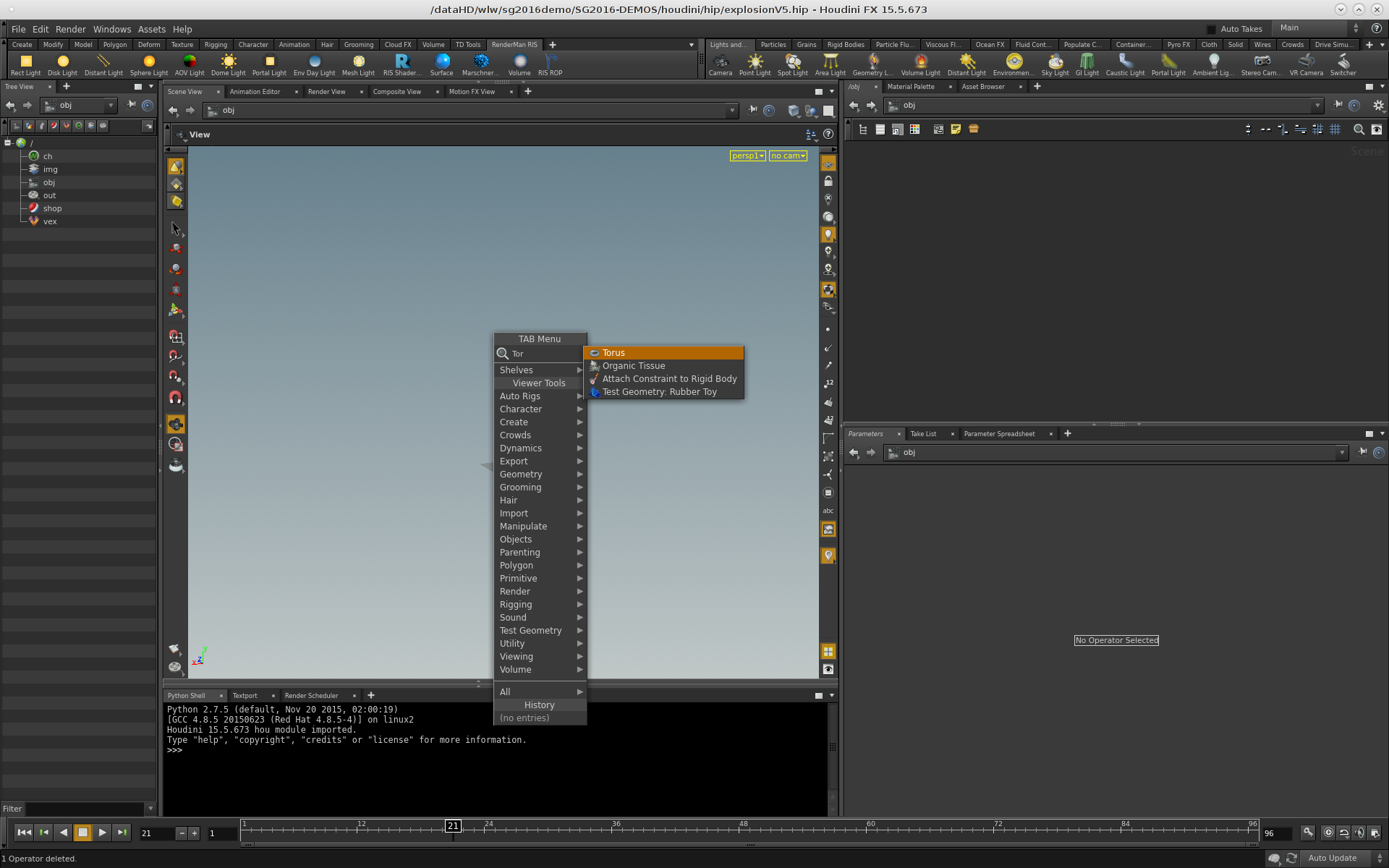 After you drop the torus at the origin, select the "PyroFX" tab from the options on the right hand side. Select the "Fireball" and apply it to the Torus and hit ENTER. 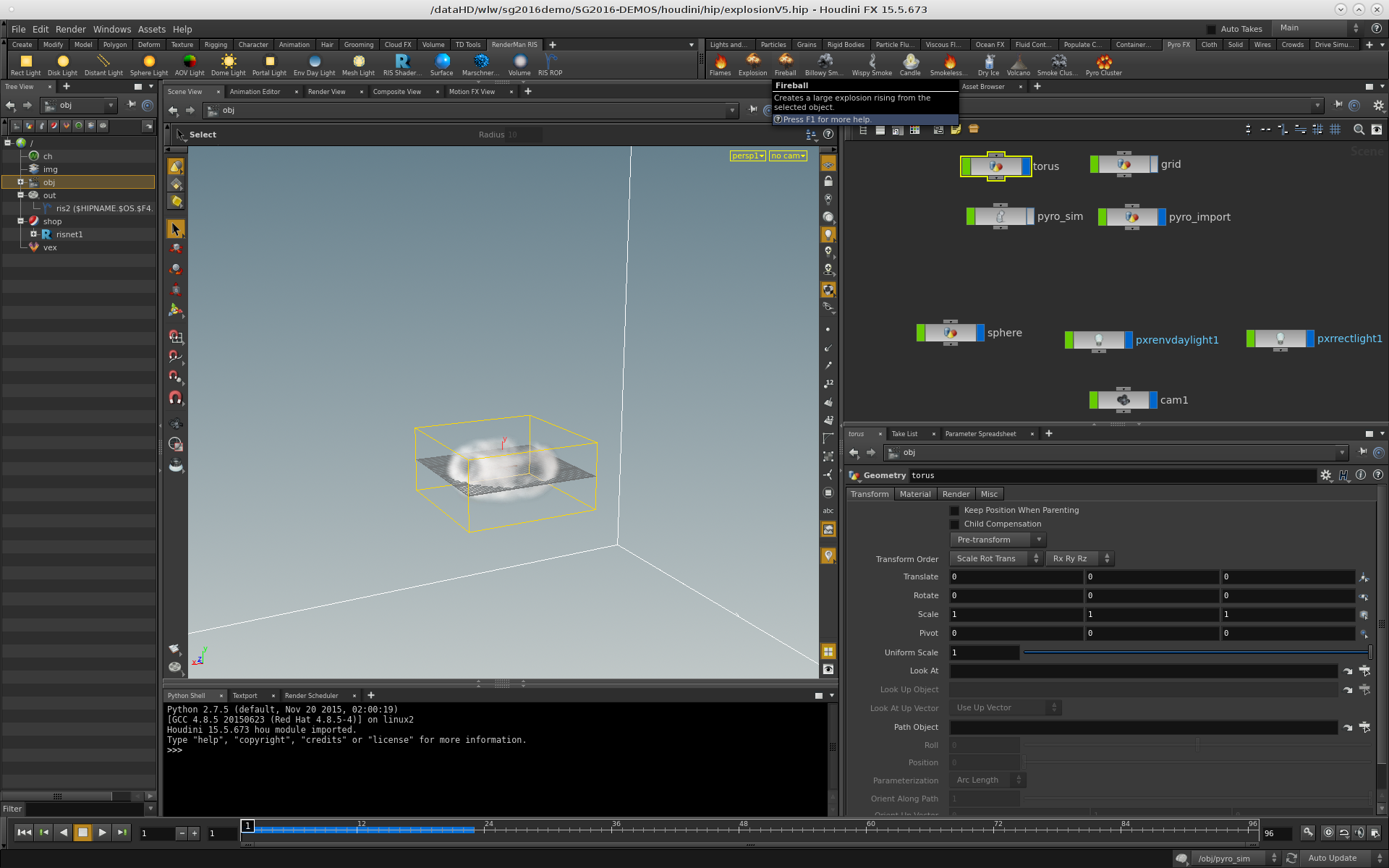 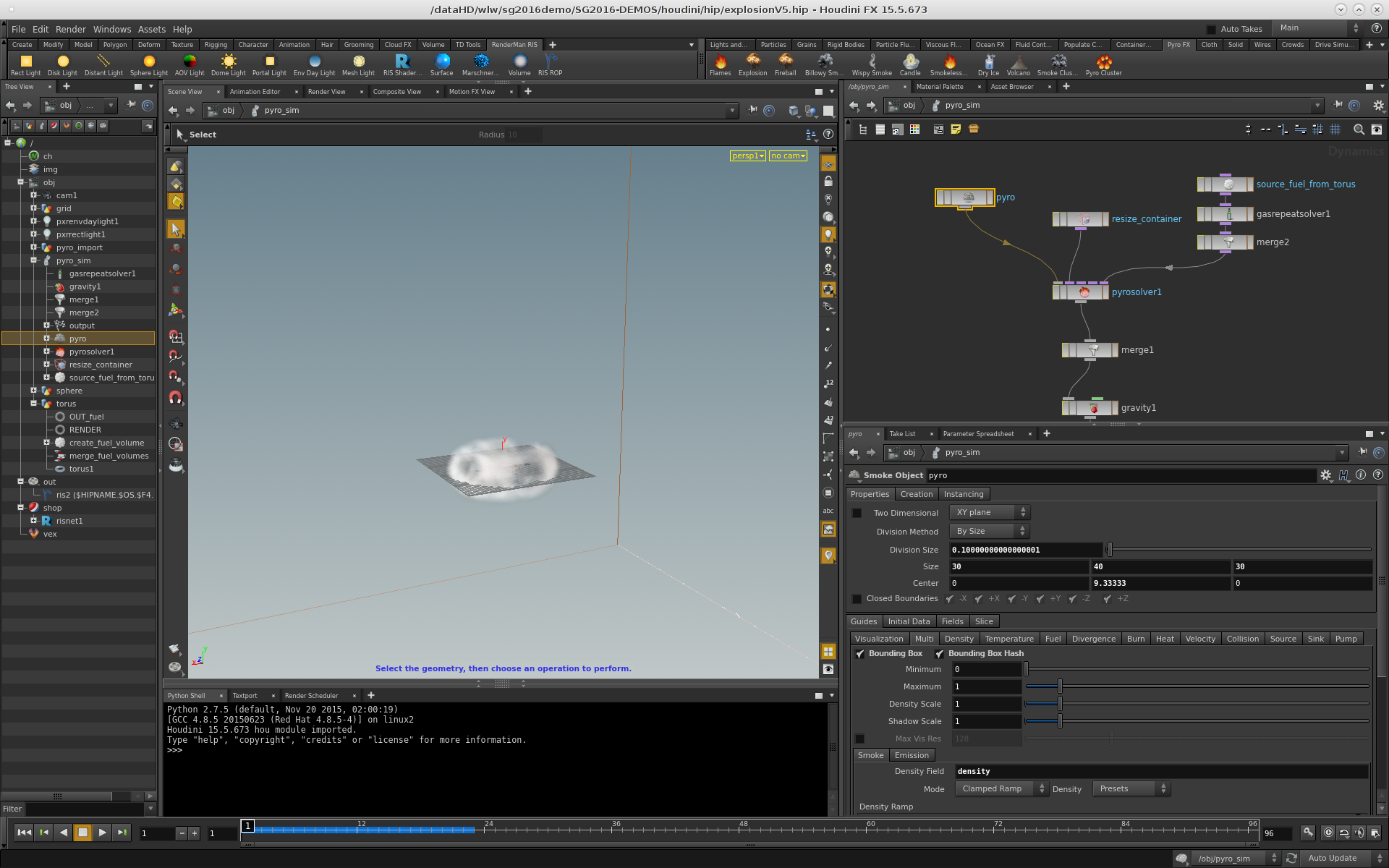 You will noticed I have dropped the "Division Size" down and I have upped the "Size" of the simulation to 30 x 40 x 30. I have also added a stock gasrepeatsolver node after the source_fuel_from_torus node to give the flame an extra boost.  Set Minimum Pass to 1. Turn on Override Minimum with Data.

You can increase the Smoke Amount from 1 to 3 if you want the simulation to have more smoke.

Now you can hit the play button in the lower right and have the simulation run for a while. In this tutorial I used frame 21 for testing my shading and lighting.

One of the quick and easy steps for setting up RenderMan for use in Houdini is to use the RenderMan RIS shelf buttons. I next pressed the "RIS ROP" button on the shelf and that gives me a ROP (Render OPerator) and also places down a default path tracer intergrator and creates an RIS specific SHOP (RIS SHading OPerator network). 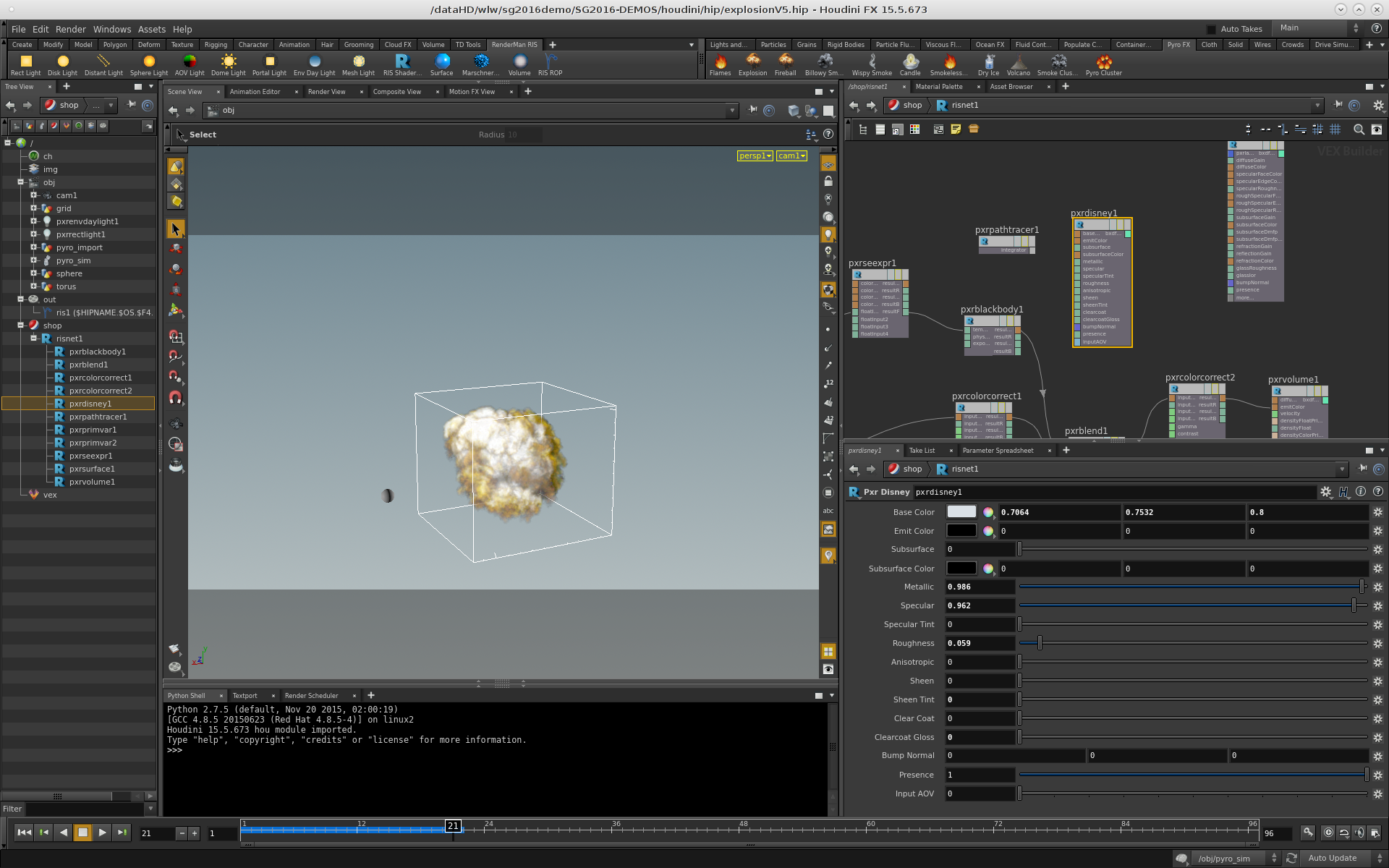 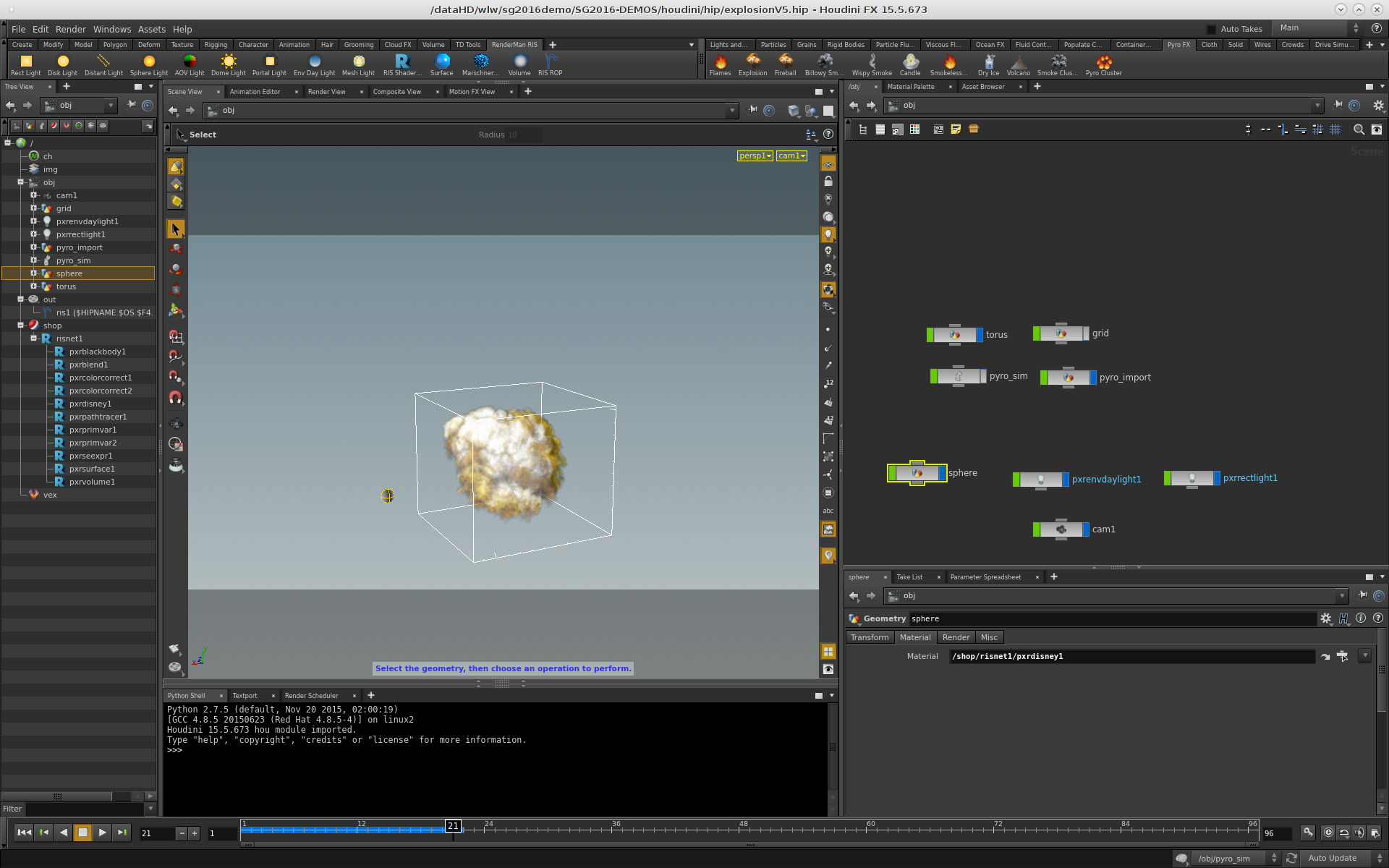 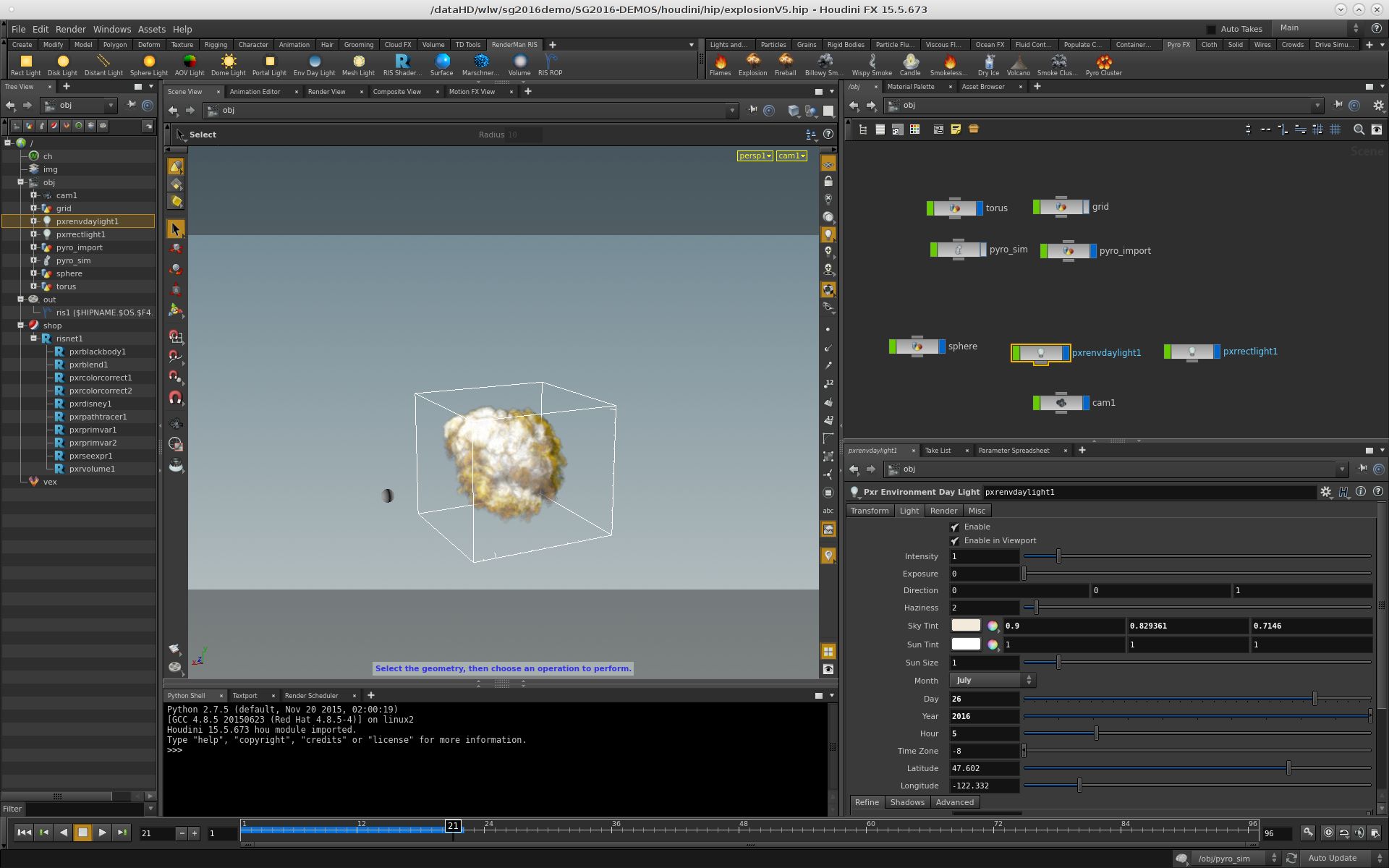 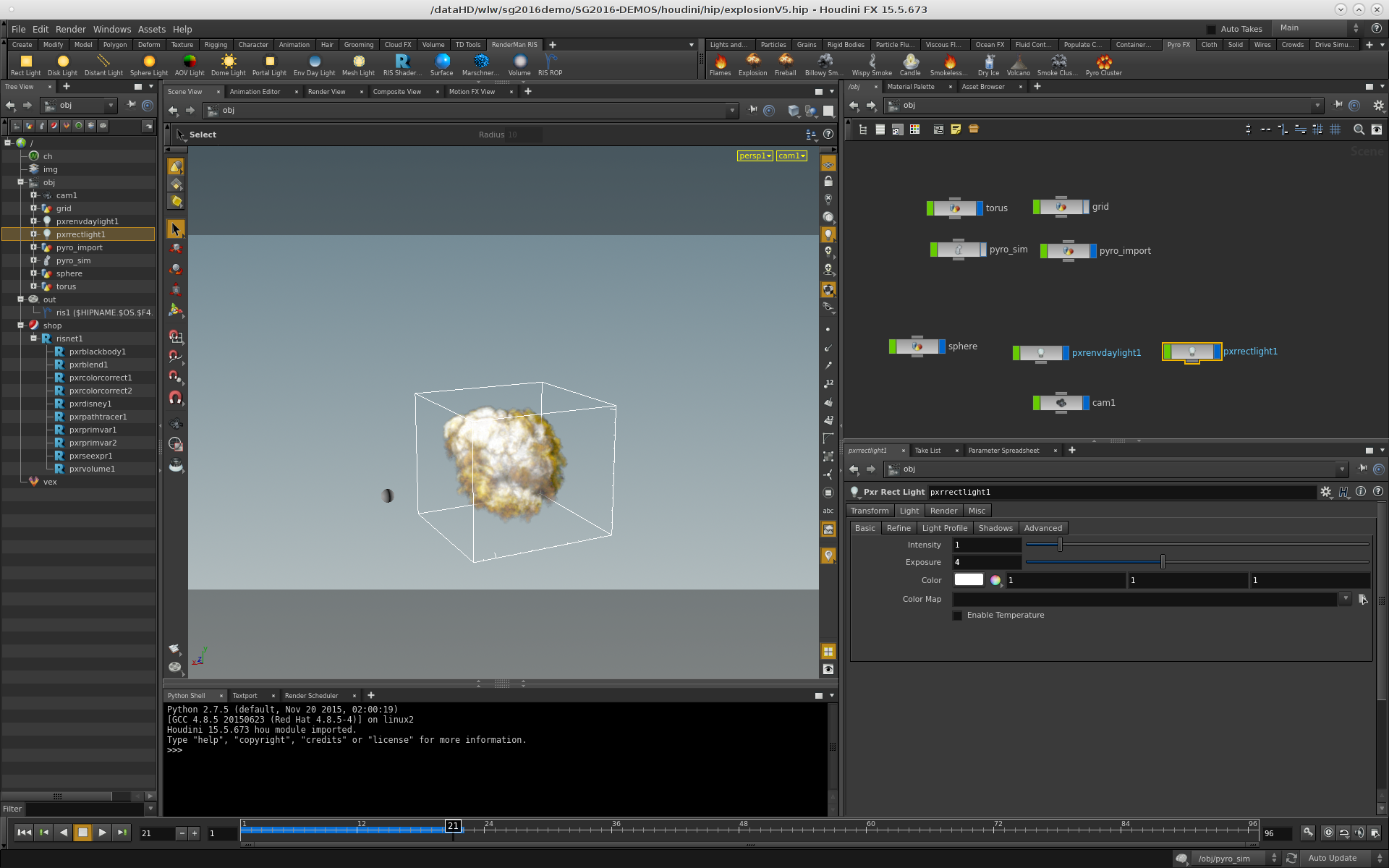 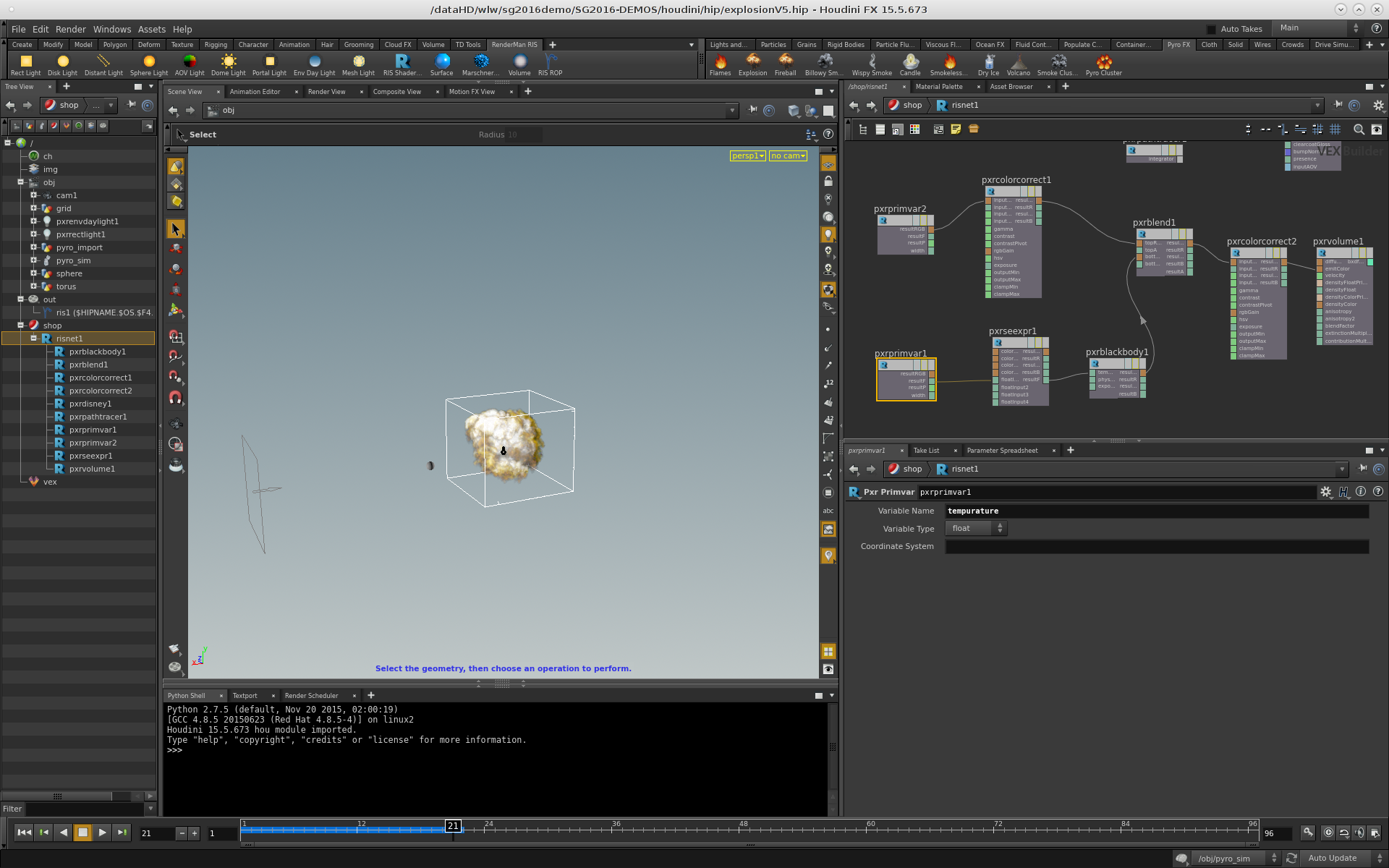 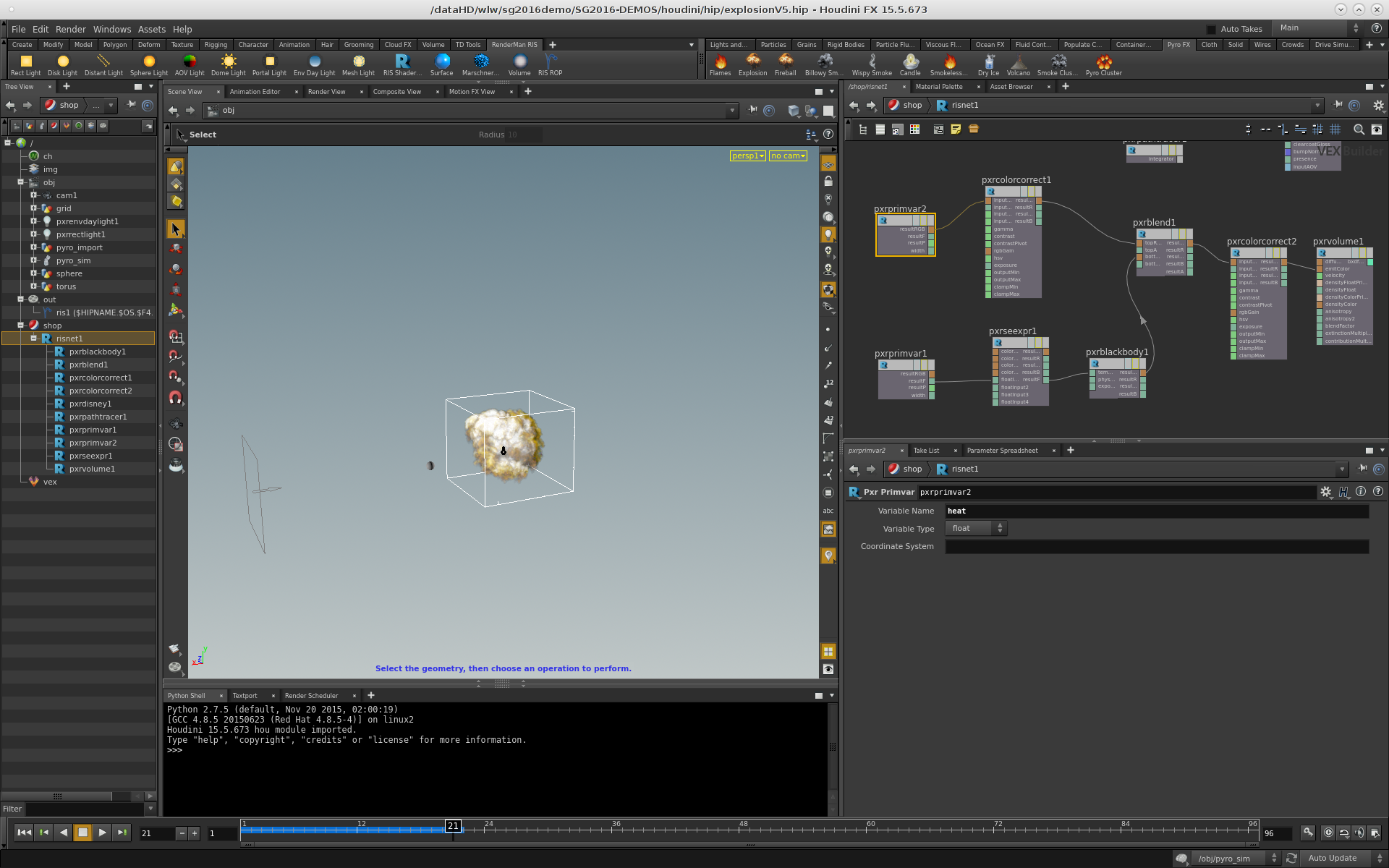 So I want to drive the intensity of the fireball with the "heat" and I want to drive the color with "temperature". So first I add a PxrSeExpr node, to scale the temperature by a factor of 200. We do this so it more closely matches the scale we expect from our physically based PxrBlackBody node, which will take temperature and convert it to a color. We drag a connection from the "resultF" of the PxrPrimVar node, into the "floatInput1" of the PxrSeExpr node, and we set the value of the second float input to a constant value of 200, the expression in the PxrSeExpr node simply multiplies the input PrimVar value by 200 and feeds the resulting floating point output into the PxrBlackBody node. 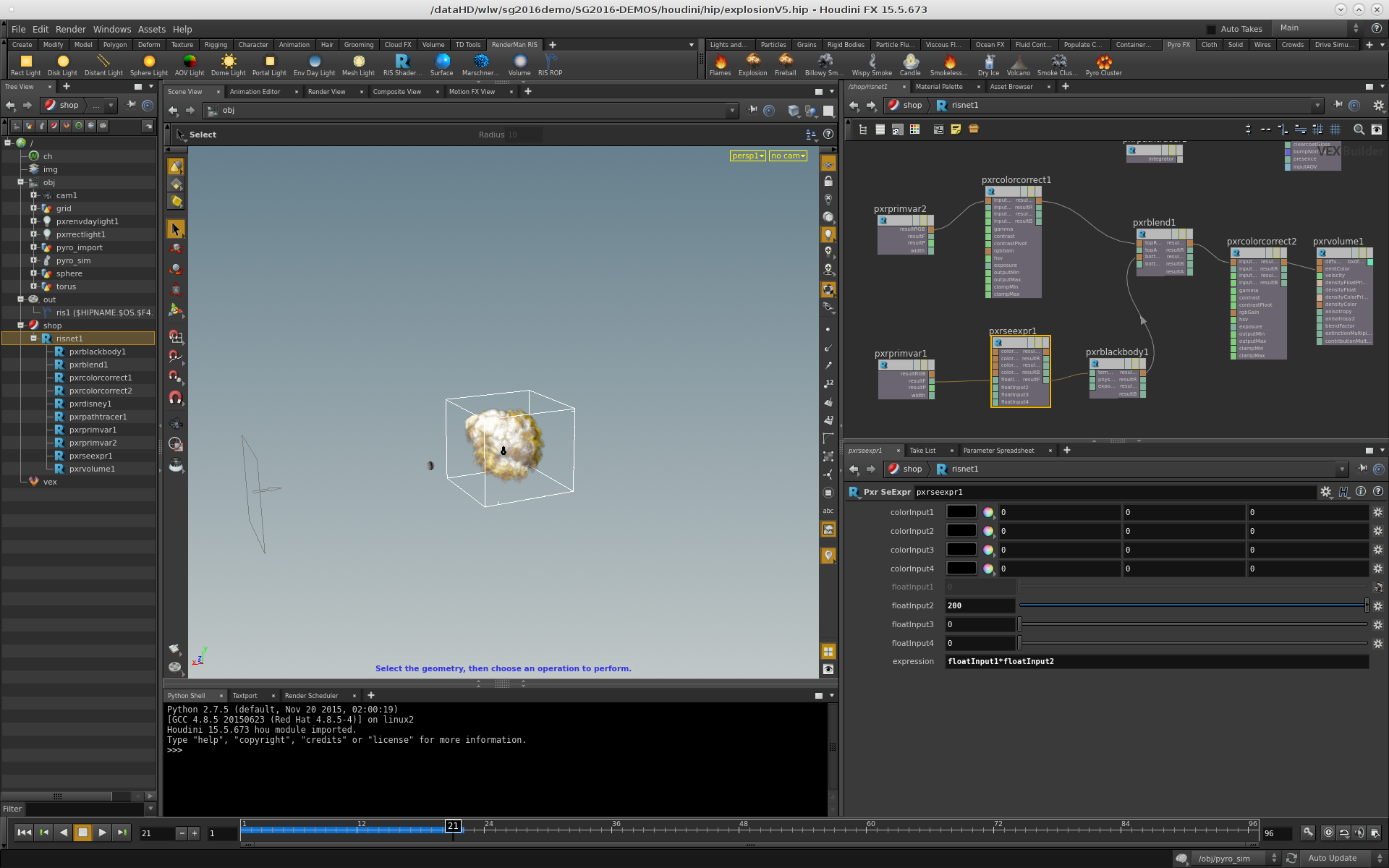 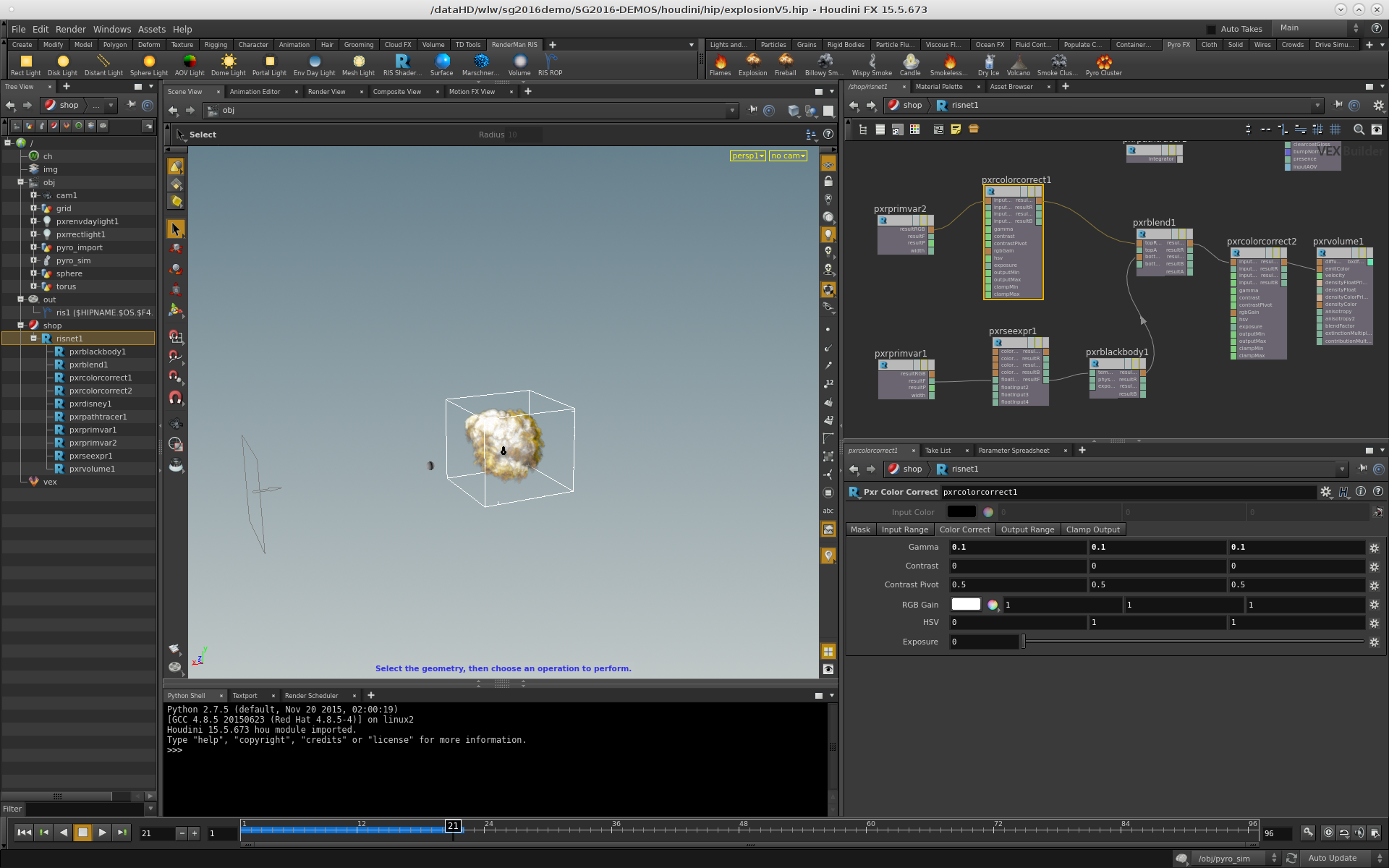 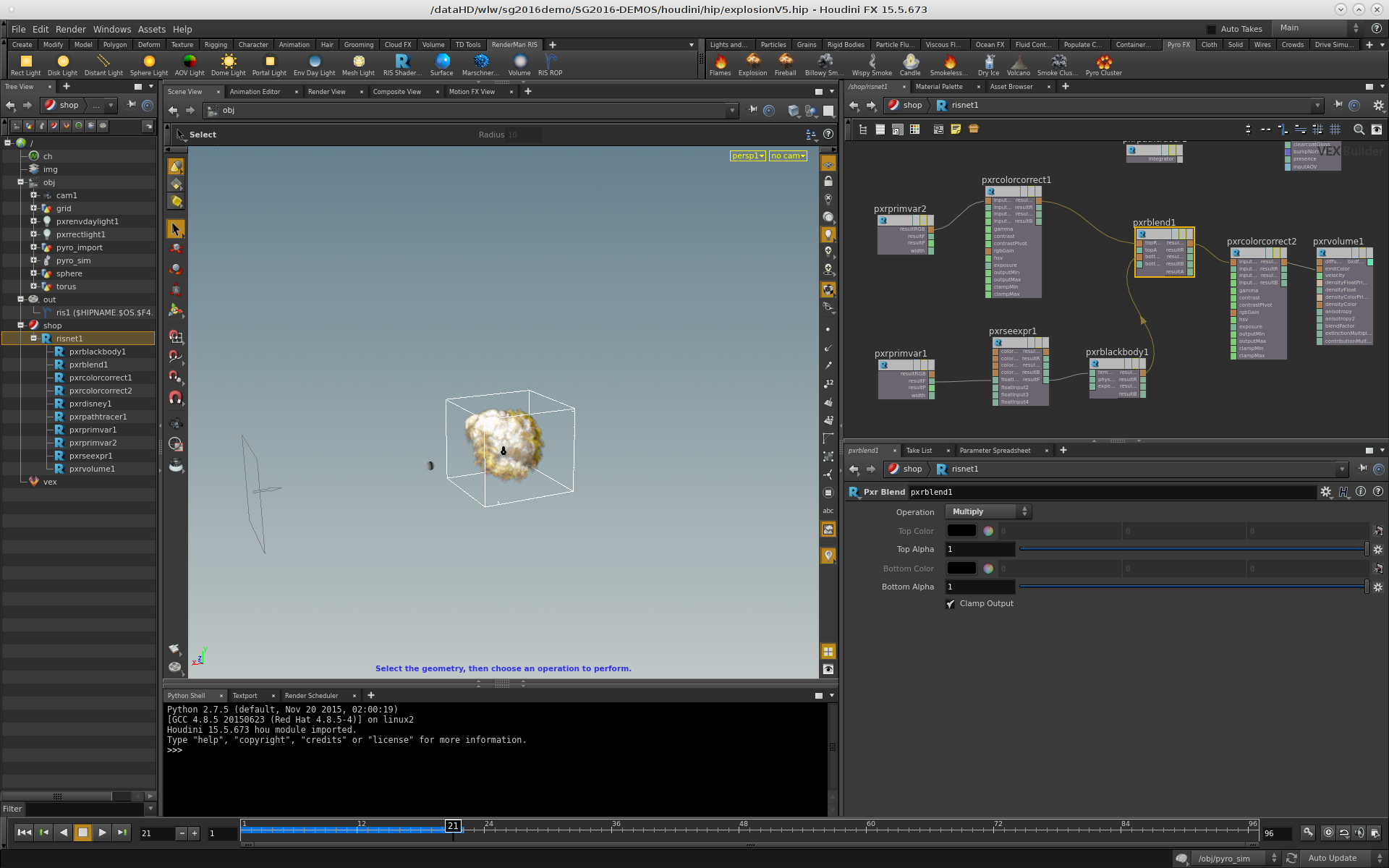 We finally color correct the final values coming out of the pxrblend1 node and feed that into the Emit Color on the PxrVolume shader. Note we first change the Exposure to 5. And we also alter the Output Range. 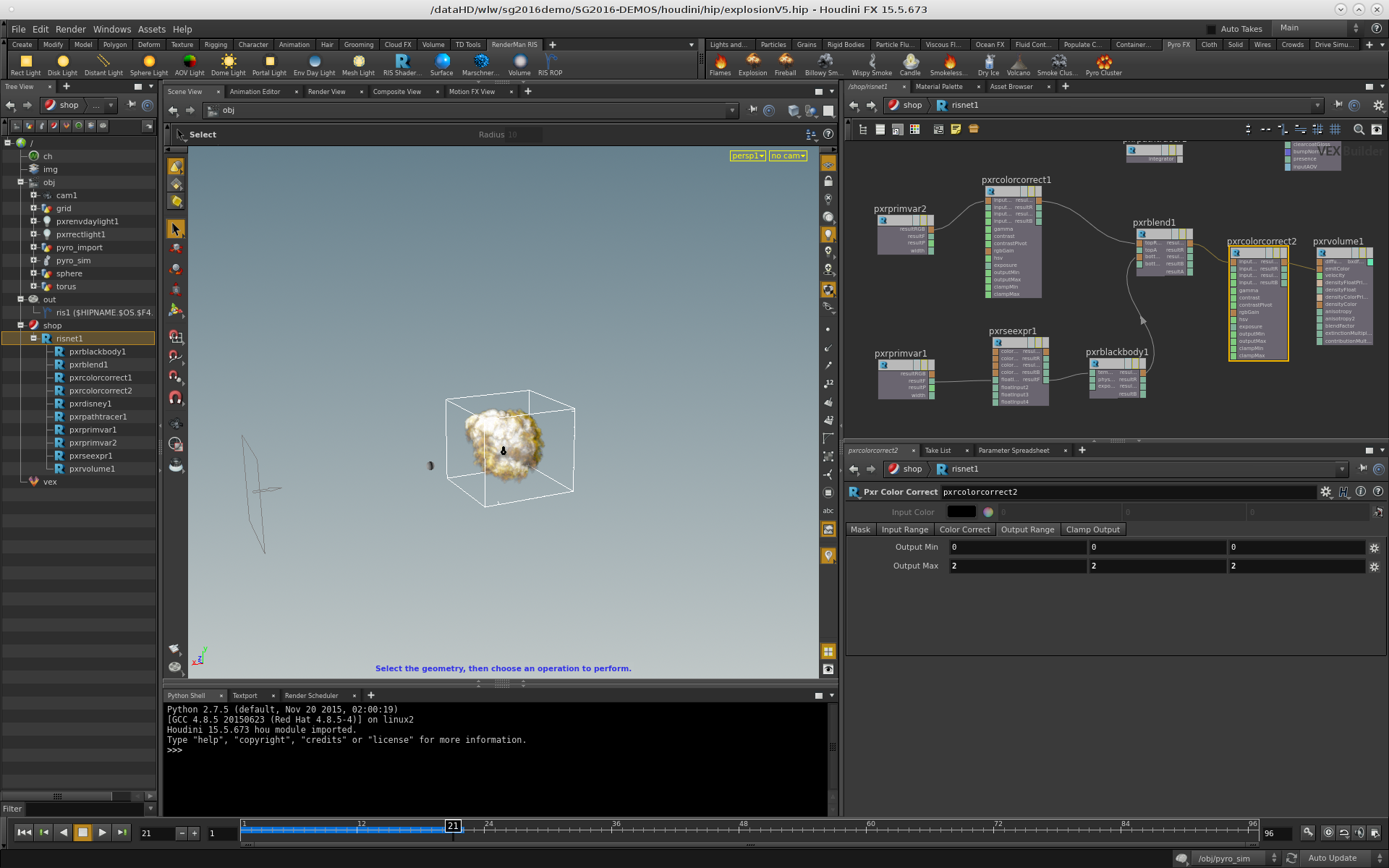 We don't show a screen shot, but on the PxrVolume node, we set the Max Density parameter to 20, to give RenderMan hints that will help it converge faster. We also switched over to the sampling tab, and set Samples to 8 and set the Step Size to 0.1

Set the pyro_import's Material to /shop/risnet1/pxrvolume1 to assign the volume shader. 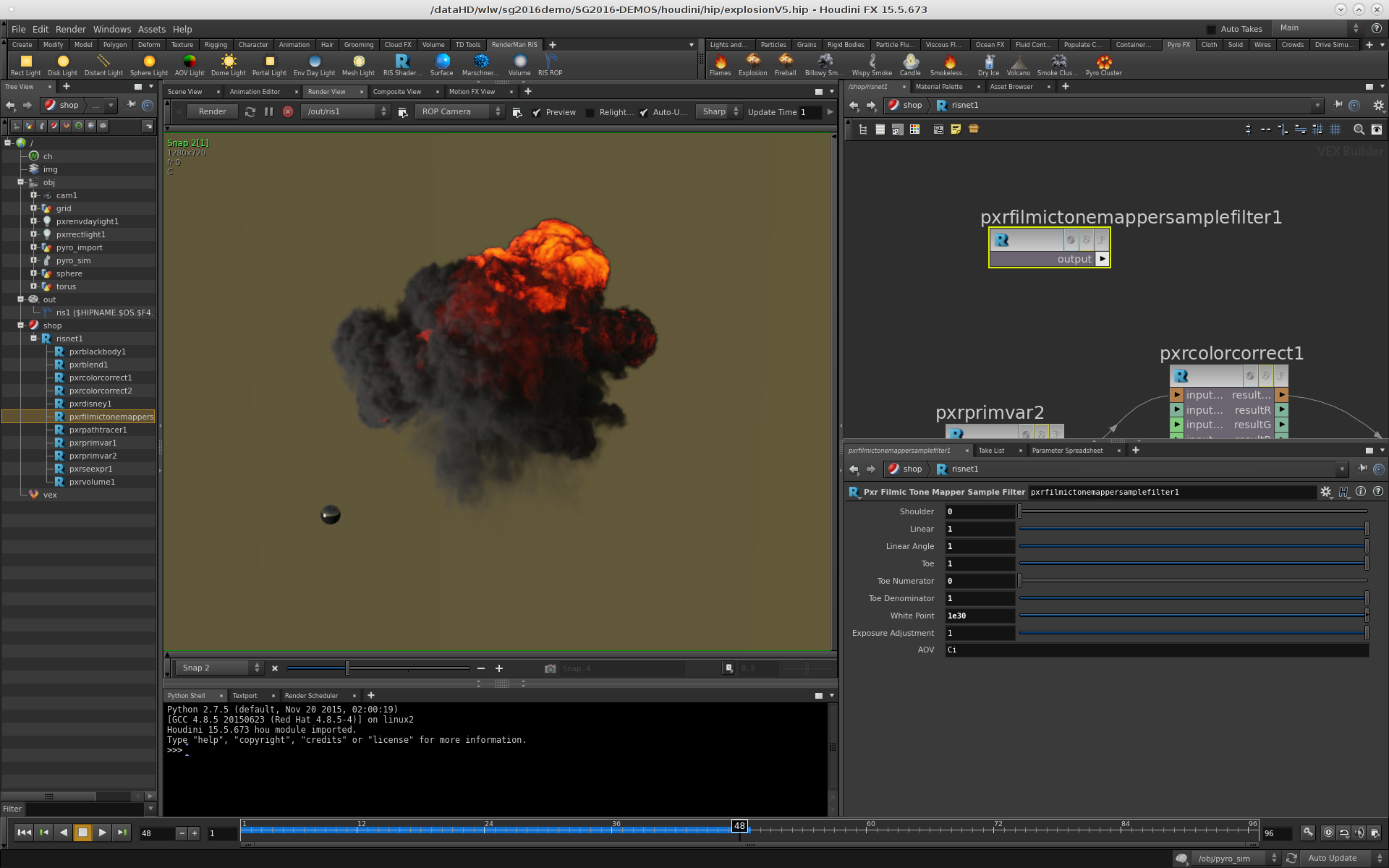 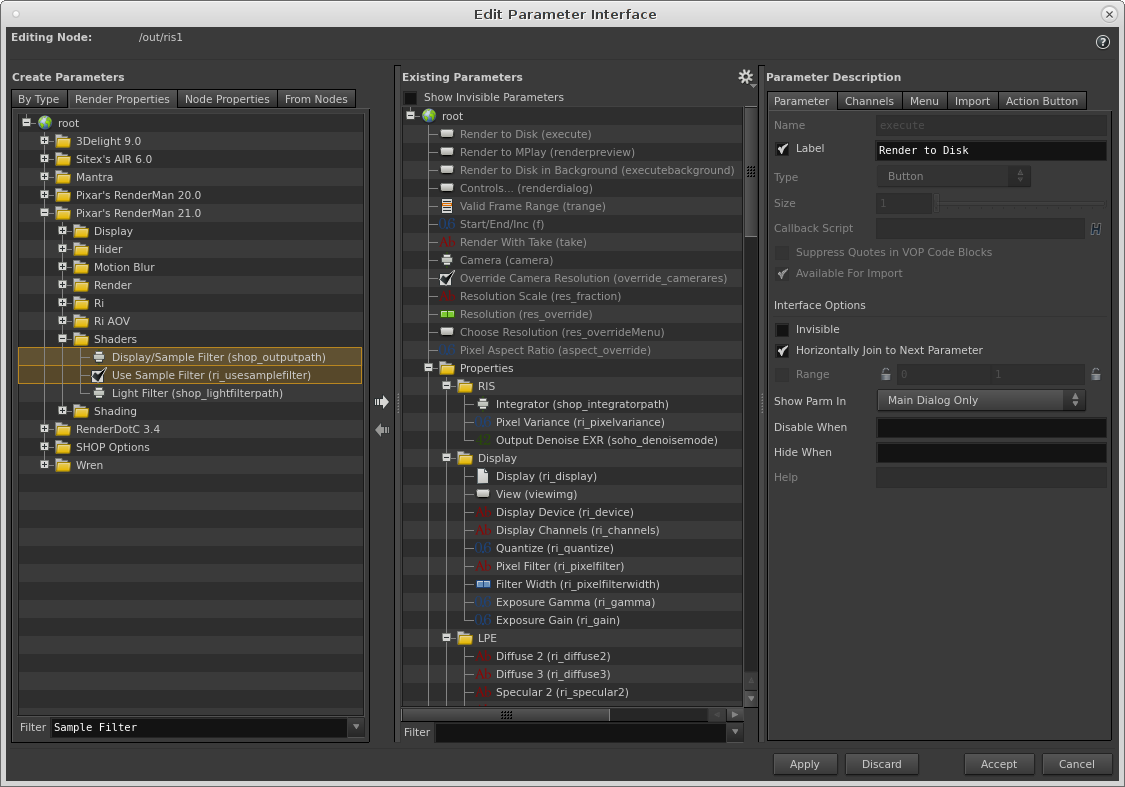 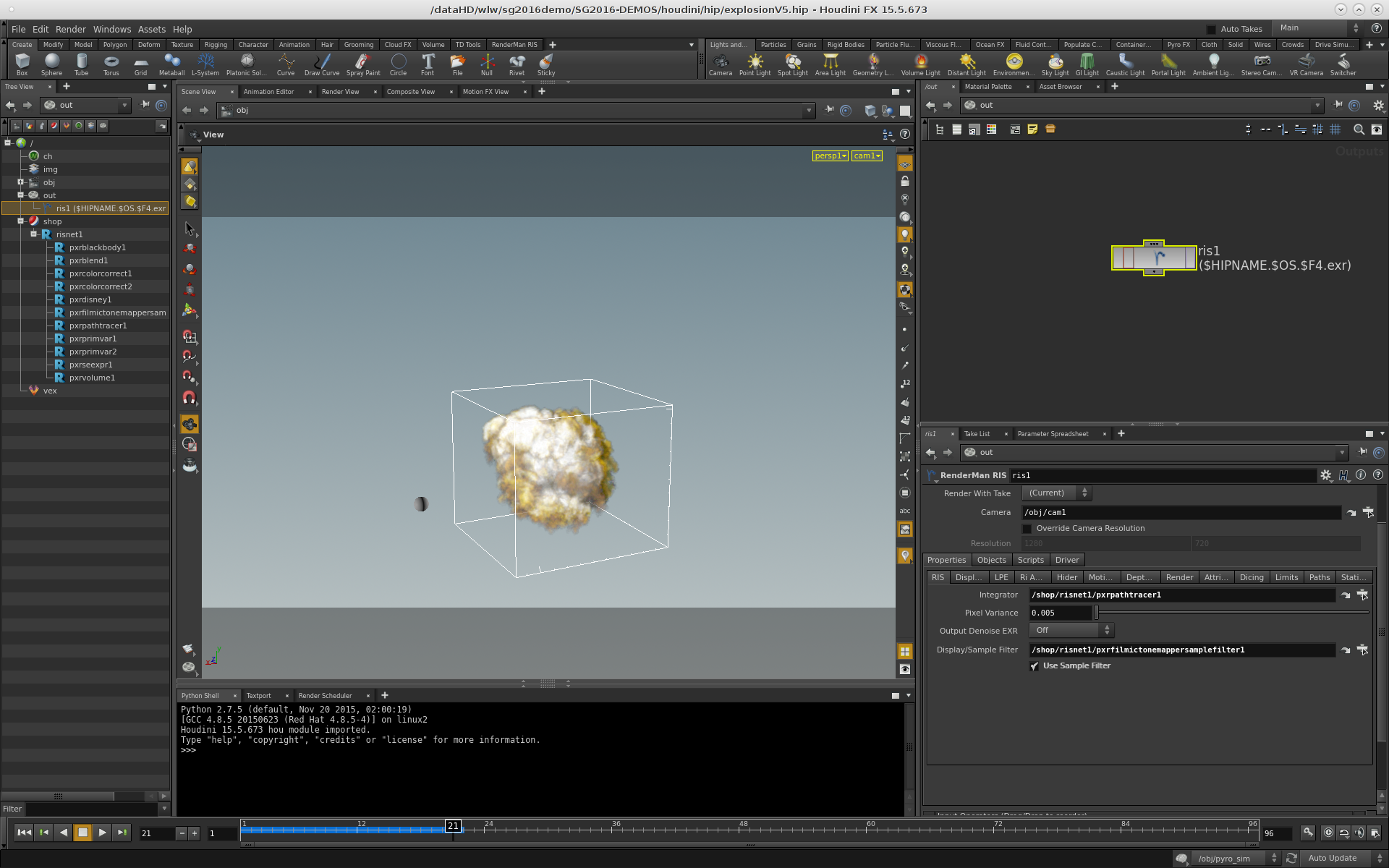