RenderMan for Houdini exposes a powerful system of AOV creation and light transport output called Light Path Expressions. To simplify usage, many of the most common AOVs are available as presets in the ROP node under Images.

A Display driver identifies the file output and type for your rendered image. You may also specify additional AOVs to be added to the file under "Extra Image Planes" described below. By default we supply a single driver defaulted to an OpenEXR file. You can add more using the Displays parameter at the top of the Images Tab 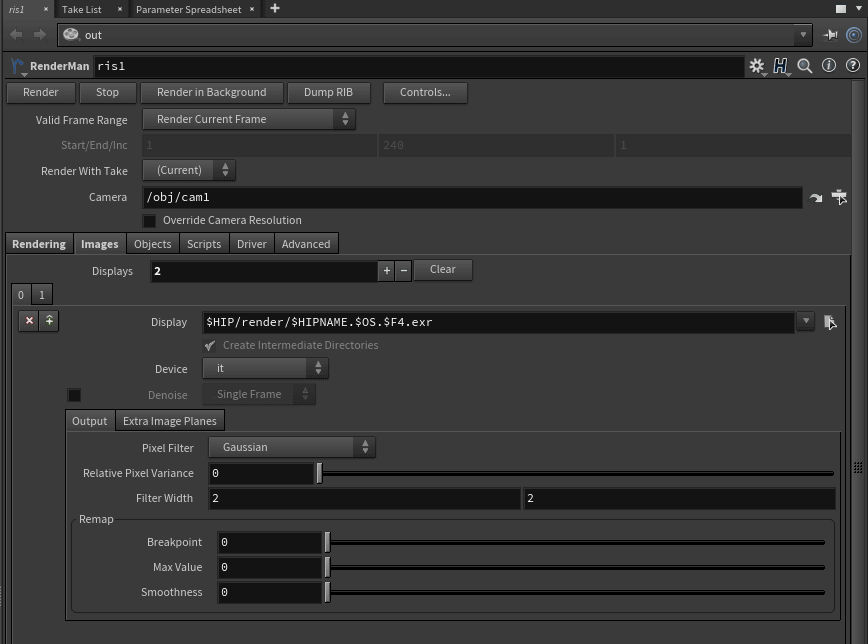 Instead of specifying a variable, you can select one of the following:

To specify an AOV you should provide the following information to RenderMan:

Name - Specify the name and type of the AOV, e.g. varying normal Nn. These selections that are built in simply need you to choose them, we provide the correct name to the renderer.

Source - Set the source string (expression) for an LPE.  If using a built-in LPE (see below images), you can leave this field empty; otherwise, you must provide the appropriate LPE expression, e.g. the type: color and expression: lpe:C<RD>[<L.>O]

Filter - For color AOVs, the recommended filter is Gaussian, this typically should match the Beauty or Ci Display Channel. Data AOVs should be unfiltered.

Relative Pixel Variance - This is a multiplier on the setting used for Quality of the final frame. This may cause this display chennel to be sampled as the main measure of quality by changing the multiplier lower, or effectively ignored if higher than 1

Filter Width - As above, when using color AOVs, a filter width of 2 2 using Gaussian matches the default render settings.

Statistics - This field is only used if you are specifying AOVs manually for Denoising.

Remap - As explained above