PxrVolume is a material that can be used to render volumetric effects which can vary wildly in complexity, including:

PxrVolume is intended to be a basic material that takes as input a small number of volumetric properties. Modeling of complicated volume properties should either be handled by upstream nodes, or baked into a volumetric file format such as OpenVDB by a simulation tool. 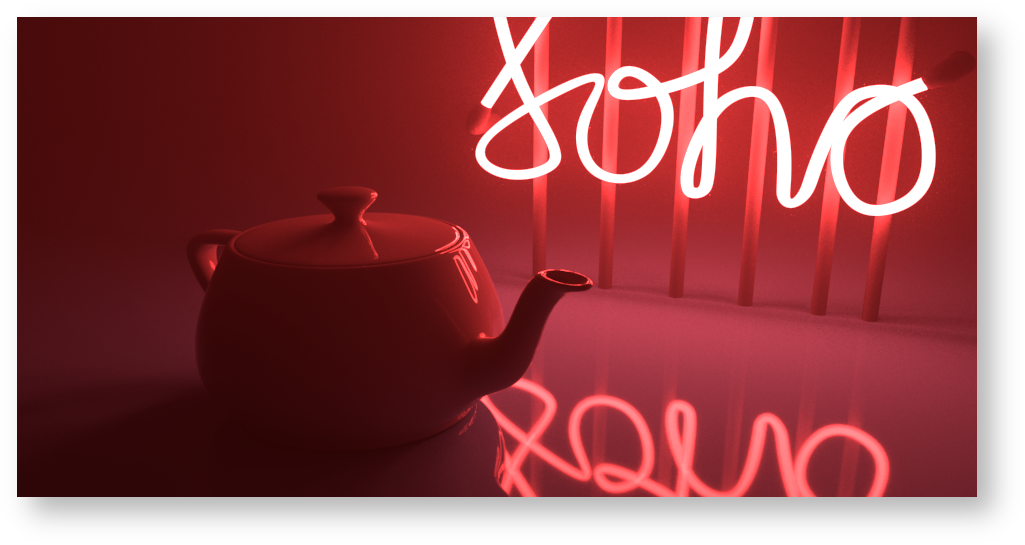 Fog effects that are constant (i.e. involving a homogeneous volume) can be easily modelled using just PxrVolume parameters, without any input connections. This provides the most efficient rendering.

For any fog effects that enclose the camera or envelop light sources, we require that PxrVolume be attached to a RiVolume object. Otherwise, PxrVolume can be attached to any closed piece of geometry in order to create simple effects such as a shaped region.

If depth attenuation is the only effect that is required, the Diffuse Color can be set to black: light is not scattered by the volume, it is only absorbed, and Density is the only parameter that is important. Otherwise, the diffuse color needs to be set to the color of the fog. 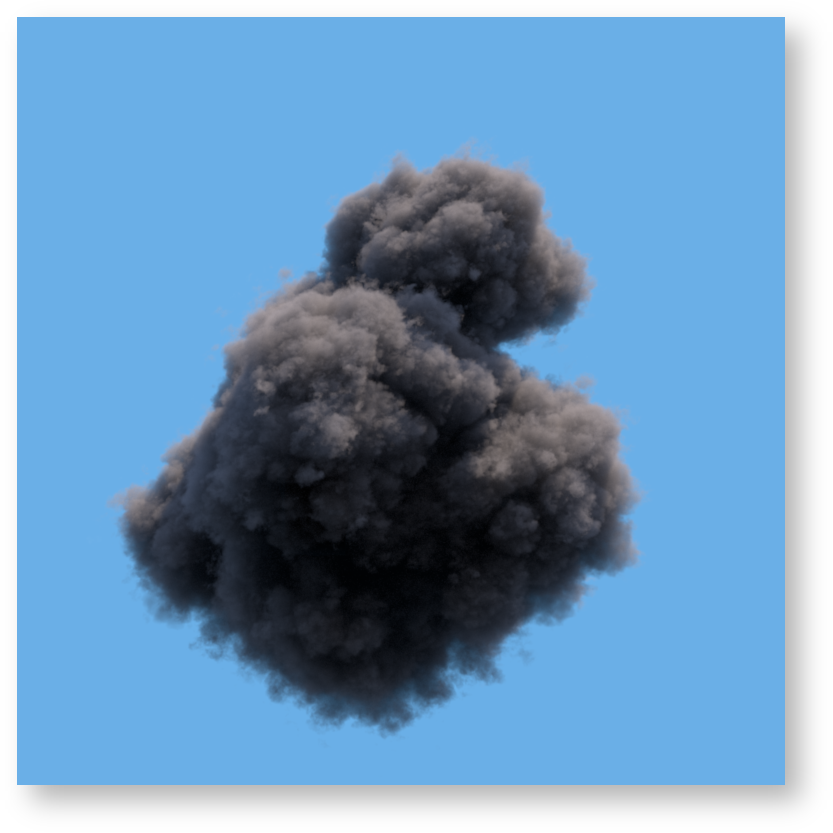 For heterogeneous media like smoke, the typical approach is to bake the properties of the smoke into a file like an OpenVDB file. The OpenVDB file would contain a small number of properties including the density, the velocity (if using motion blur), and possibly the albedo. The OpenVDB should be attached to a RiVolume and read using the impl_openvdb plugin. The name of the density property of the OpenVDB file is then used directly with the PxrVolume Density Float PrimVar parameter.

Smoke tends to have a very low albedo, so a dark color is used for the Diffuse Color parameter. (If the color is baked into the OpenVDB file, a PxrPrimVar node can be used to extract the color property from therein.) Because of this low albedo, there is usually very low amounts of light that have scattered multiple times in the volume, so Multiple Scattering can be left turned off, and Samples can be increased beyond 1 to provide faster rendering. 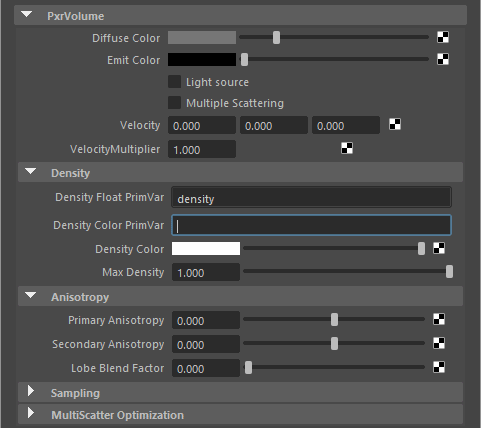 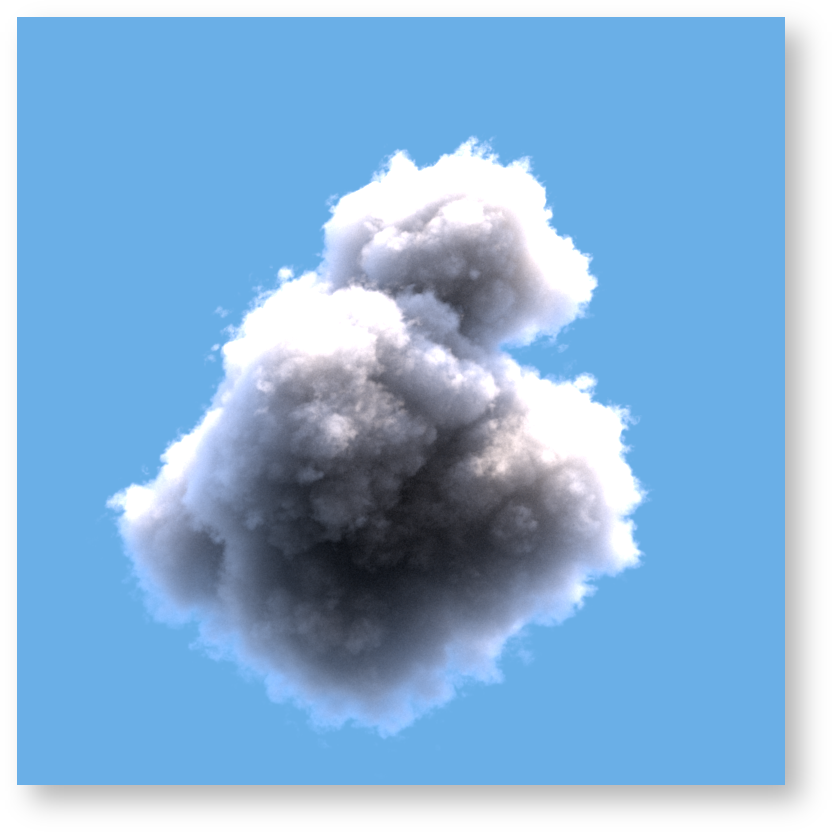 Clouds are very difficult volumes to render, because the aggregate behavior of water droplets and their interaction with light is a complicated phenomenon. Unlike smoke, the light that reaches the eye from a cloud has typically bounced inside the cloud tens or hundreds of times. On top of that, the scattering behavior (the way light bounces inside the cloud) is very complicated, as it involves both forward scattering and backwards scattering, with multiple peaks for both.

A typical approach to modeling the cloud itself is to bake the density of the cloud into a file like an OpenVDB file, and the name of the density property of the OpenVDB file would then used directly with the PxrVolume Density Float PrimVar parameter. Clouds typically reflect all light, so a simple Diffuse Color of (1, 1, 1) is sufficient. In order to capture the complicated light behavior of the cloud itself, Multiple Scattering is required, along with setting a Primary and Secondary Anisotropy. The settings for anisotropy below reflect a physics based approximation to the complicated scattering behavior of real clouds. Because multiple scattering is used, the samples parameter is unused and can be set to 1. Finally, if there are no light sources inside the clouds themselves, Equiangular weight can be set to 0.0 as equiangular sampling would provide no benefit. (On the other hand, in the case of stormy weather where lights might be placed inside the clouds to simulate lightning flashes, equiangular sampling might prove beneficial.) 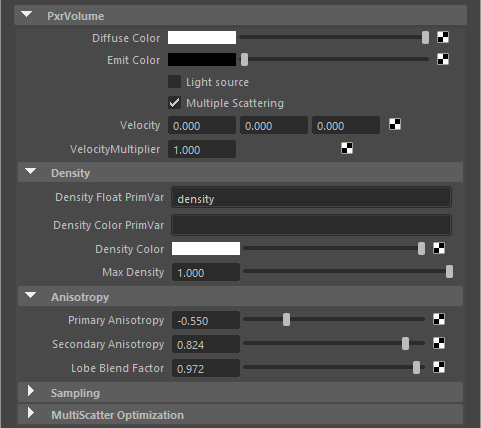 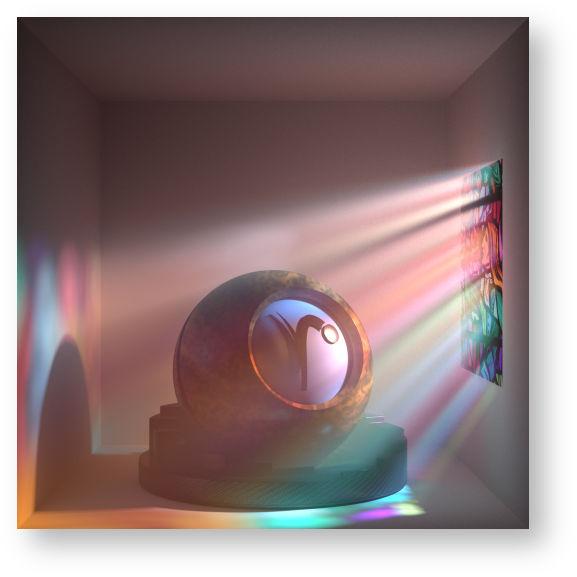 Crepuscular beams (sometimes called "God rays") is simply the result of light scattering in a volume. When this light is isolated into beams (for example, the few rays of sunlight that escape through a forest canopy) the contrast between the parts of the volume that scatter light and the rest of the volume leads to a striking effect.

In order to efficiently render crepuscular beams, it is important to try to maximize the effect of direct lighting - i.e. maximize the volume that can directly trace a path to a light source. If the volume must trace a path to a light source indirectly by going through another surface or material, the convergence of the beams may be very slow and unacceptably noisy. In the image above, the stained glass window on the right is modelled as "thin glass": instead of relying on a secondary material bounce to refract through the glass, shadow rays from the volume that trace towards the light source are unimpeded (do not refract), and rely only on the shadow tinting behavior of the stained glass material. The "thin" parameter of PxrSurface (located under the glass parameters) allows one to achieve exactly this optimization.

Density is the most critical property of a volume. It is a measure of both how much light is absorbed and scattered by the volume. Volume integration may require many billions of density evaluations over the course of a single render, so it is important to ensure that the renderer can evaluate the density as quickly as possible. This is where baking a complicated signal to a volumetric file format such as OpenVDB can be useful, as it means the renderer can simply look up the value from the data. For best performance, we highly recommend using the PrimVar density parameters if at all possible, rather than using an input connection, even if that input connection is just a single PxrPrimVar node.

For heterogeneous volumes using the RiVolume primitive, at the beginning of the render, PxrVolume will automatically compute density everywhere inside the volume and use this information over the course of the render to greatly speed up the density sampling. The accuracy of this computation (as well as the accuracy of deformation motion blur) is controlled by the dice attribute micropolygonlength . Setting the micropolygonlength to a low number will result in a very accurate density estimation, but may cause the initial computation to take a long time (manifesting as a slow first rendering iteration) and may also cause the renderer to use a lot of memory. Setting this value too high will lead to a less accurate density estimation, which may cause isolated pockets of very high density in the volume to be missed. For a 2K render, we recommend that a setting of 5 or more be used, unless deformation motion blur requires a lower setting. If the camera is passing through or near the volume it might be advisable to change the dicing projection from planar to world or spherical. You may lose some details near the camera but it might avoid creating lots of data near the lens.

Emissive volumes may be very slow to converge, especially if they are the only light source in the scene - it may require many hundreds or even thousands of camera samples to render a noise free image. We suggest that emissive volumes be used very sparingly, instead use the Light Source parameter.

Multiple Scattering is a very costly effect, both because it means the light is bouncing that many more times in a volume, but also because PxrVolume cannot take more samples itself (the Samples parameter is ignored), and is at the mercy of the Integrator settings. Moreover, multiple scattering may slow down the convergence of objects behind the volume. Therefore we suggest that whenever possible, multiple scattering should be avoided. For media with low albedo, multiple scattering adds very little to the final render. For some media like clouds, whose light transport involves many tens or hundreds of light bounces, unfortunately multiple scattering may be unavoidable.

The color of the volume. Default is white (1,1,1). Making a connection on this parameter will create a heterogeneous volume. 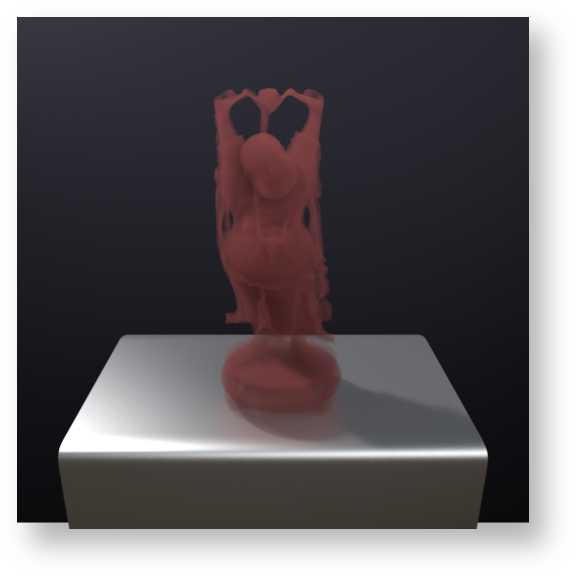 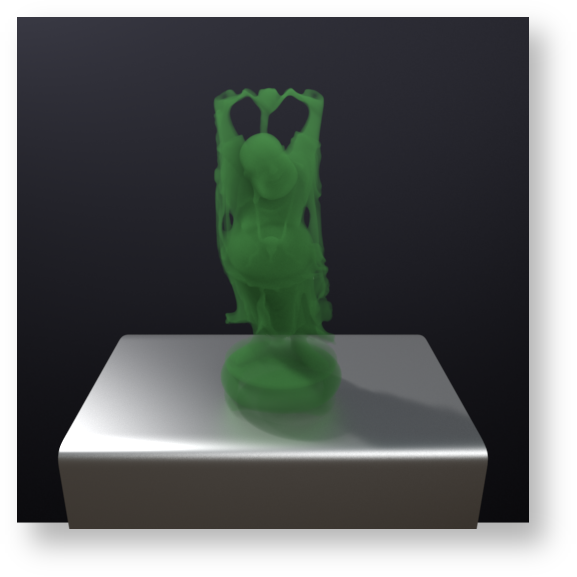 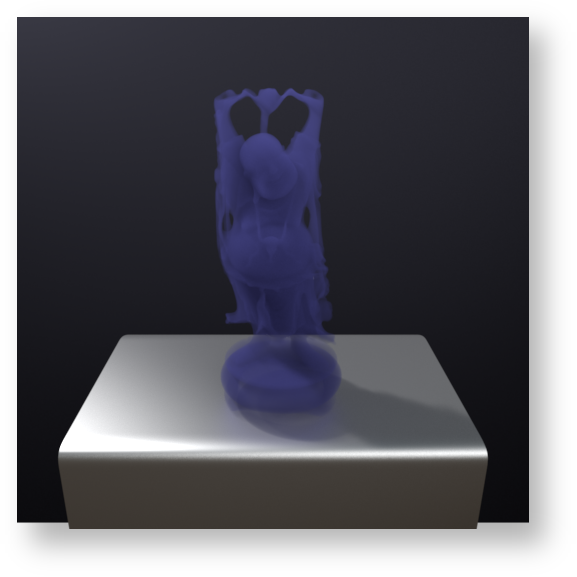 The emissive color of the volume. This is useful for modeling effects such as phosphorescent fog or fire. Default is black (0,0,0), i.e. the volume will not emit light. The following images demonstrate an emit color setting of (1, 1, 1) and (5, 2.5, 2.5), with no other light sources in the scene. 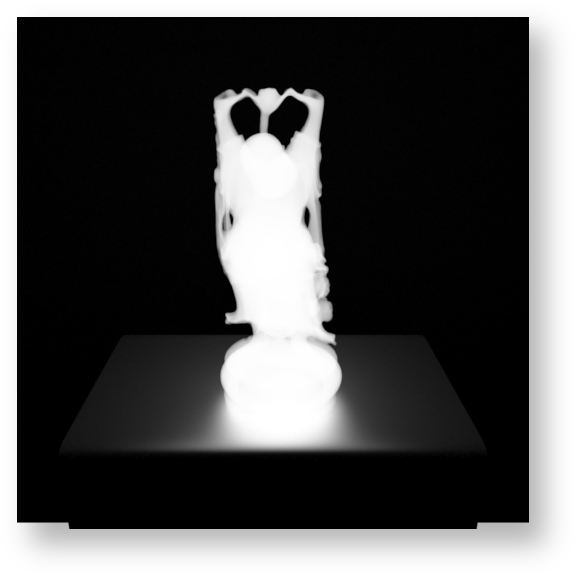 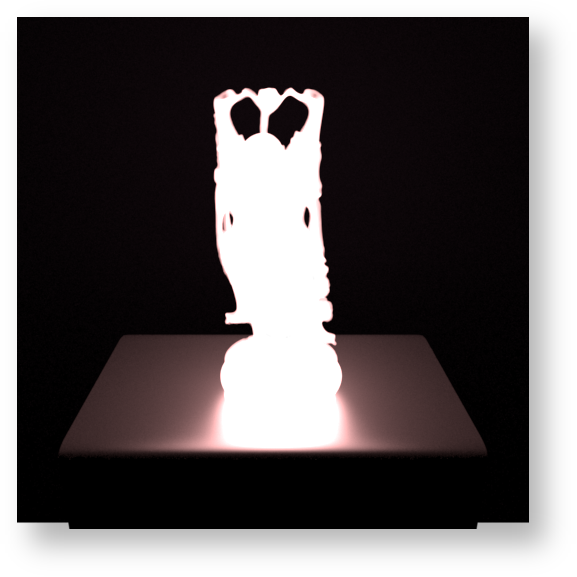 When this option is selected, the emissive properties of the volume are sampled as a light source. This may brighten your scene through improved sampling. Note that the emit color cannot be black for this to operate. With a single scatter volume, even at maximum path length 1, it is equivalent to a multiscatter volume with the light source option turned off. Below is off versus on. 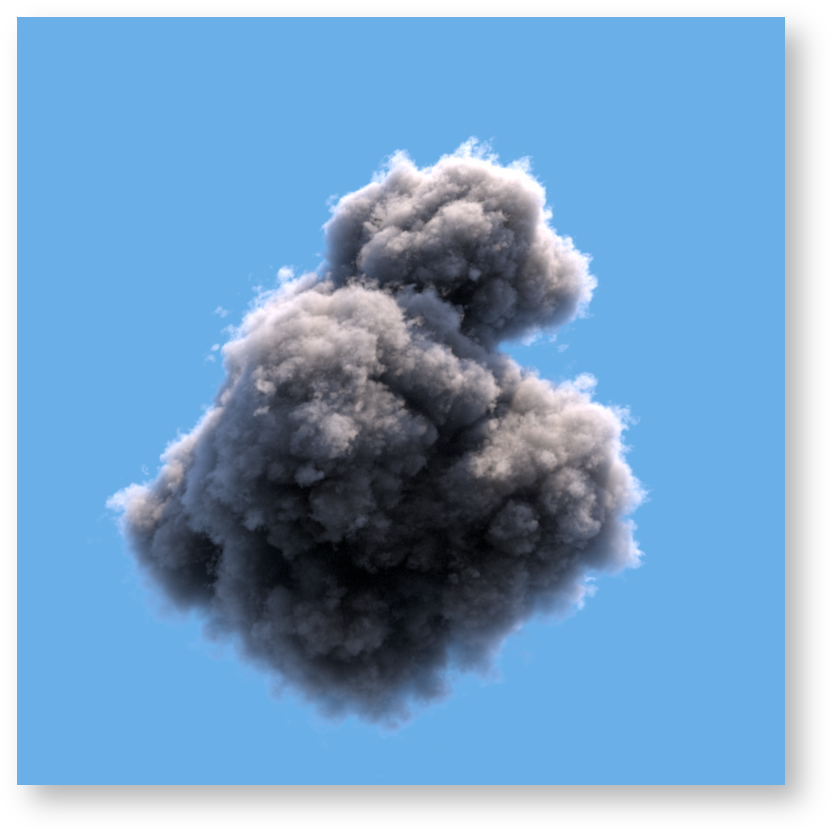 Note that due the nature of their algorithm, some integrators (in particular, bidirectional path tracers such as PxrVCM) have no choice but to implement multiple scattering of volumes, and therefore will ignore this hint.


Unlike all other geometry types in RenderMan, deformation motion blurred volumes are enabled primarily using Bxdf controls. Enabling deformation motion blur with PxrVolume is straight forward: specify a value for the velocity parameter, which is vector valued. Under the hood, the renderer will automatically use the velocity vector to generate temporal varying data for all varying inputs. (This preprocessing step occurs at the beginning of the render, and will increase the time to first pixel; however, it is necessary in order to greatly increase the efficiency of rendering blurred volumes.) Depending on the data, it may also be necessary for you to expand the displacement bound attribute of the volume container in order to encompass the maximum velocity of any part of the volume; failure to do so may result in clipping artifacts.

The velocity vector value is expected to be relative to the entire frame. If you are working with velocity data measured in units per second, you may need to scale the data by the number of frames per second (i.e. 1/24.0) for a correct picture.

We supply a control as a Velocity Multiplier to aid in conversion should your data be in the wrong measurement or allow you to make artistic tweaks to the motion blur.

As noted above: unlike other parameters to PxrVolume, the accuracy of deformation motion blur is directly related to and controlled by the  dice attribute  micropolygonlength . If you find that the fine detail of a motion blurred volume is lost, you may need to decrease this attribute in order to regain the detail. This will have a direct effect on render times and memory.

Deformation motion blurred volumes do not currently work with the Density Float PrimVar or Density Color PrimVar inputs. You will need to use a PxrPrimVar node connected to either densityFloat or densityColor instead . Typically, this means that any usage of deformation motion blurred volumes with an OpenVDB file will require the use of two PxrPrimVar nodes: one connected to the velocity input, and one connected to the density input, as illustrated below: The following images were rendered with this exact shader setup, in conjunction with an OpenVDB file containing a velocity grid. Image on the left was rendered with no blur, while the image on the right has the velocity connection applied. 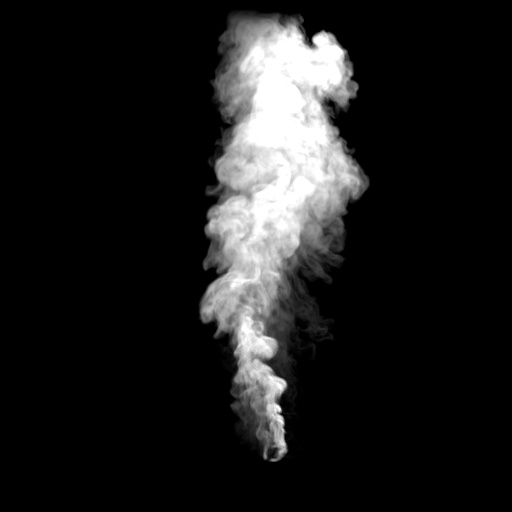 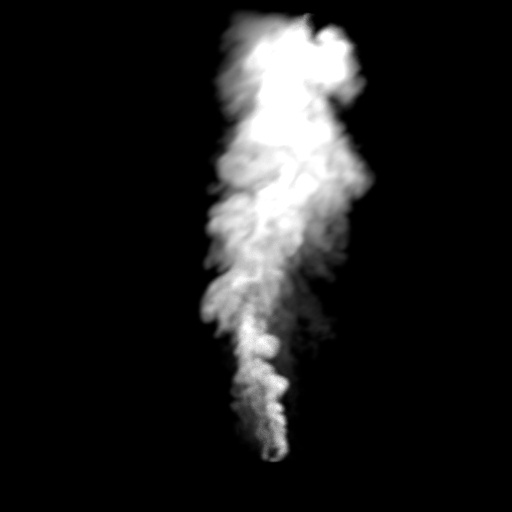