Katana's powerful and flexible look development environment combined with RenderMan's state-of-the-art rendering technology come together to offer the user a remarkable out-of-the-box experience for for high-end lighting and rendering. RenderMan for Katana (RfK) provides seamless access to RenderMan's powerful rendering system for Katana users, who can take advantage of the plugin's flexibility to create an optimal, customized pipeline. 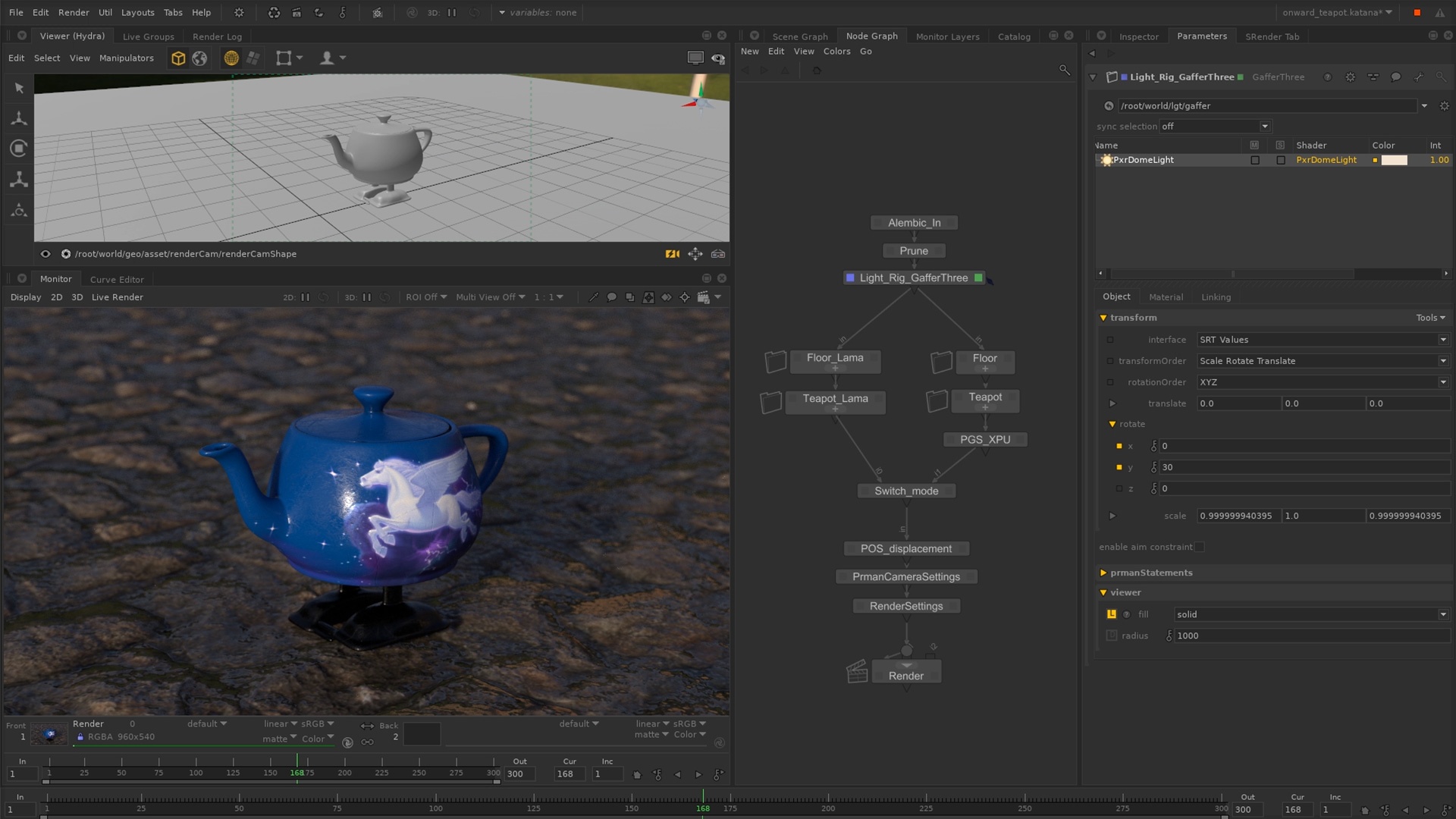 The RenderMan plugin for Katana plays a dual role in a production pipeline; it is the bridge by which a user generates rendered images from a Katana scene as well as the provider of access to the tools for building the 3D elements within the scene.  Although RfK is generally referred to as a "plugin" it is in actually a collection of plugins, nodes, macros and other tools which together allow the Katana user full access to the PRMan rendering system. Included in the RfK plugin package:

There is no need to "load" the RfK plugin.  Once it is installed and configured Katana will find the package automatically and load the various modules as needed.

Vastly improved Live Rendering is iterative rendering where you can change parts of your scene and see it update in the render.  Live rendering improves lighting and shading iteration. RfK supports offers the following features:

RenderMan ships with built-in production-quality shaders and lights, the same shaders and lights in use by Pixar Animation Studios on their feature films. Pixar shaders are loaded automatically at startup and available through the standard Katana material workflows.  Pixar lights can be created in GafferThree with a single key-stroke or directly via the menu. Mesh lights can also be created by simply selecting the geometry and creating a PxrMeshLight. Viewer Plugins and Manipulators are also included for the built-in lights and light filters.

RenderMan includes "it", a robust framebuffer/render view window which offers complete floating point support and a powerful and flexible catalog. "it" is a fast and powerful imaging tool that is capable of production-quality image manipulation and compositing usually found only in high-end standalone products. Thanks to its integration with the plugin and an all-new Python scripting interface, "it" gives users the ability to incorporate sophisticated post-render image operations into their rendering pipeline.

Photo Realistic RenderMan (PRMan) is designed to be fast and easy to use while generating production-quality renders and global illumination works out of the box and live rendering provides rapid iteration for artists.  RenderMan for Katana supports all aspects of PRMan through both standard and PRMan-specific nodes.

RenderMan supports updating a scene during rendering. Many features are supported including importing and exporting assets on-the-fly, animation, transformation, light and material parameter changes and more!

Stop waiting for a render to begin. RenderMan skips the RIB generation process when rendering in interactive sessions to give users control and results as quickly as possible.

Sometimes called "Indirect Illumination," RenderMan for Katana supports Global Illumination effects, subtle diffuse shading effects that are created by sampling the lighting of a scene many times from a given point. This technique can yield highly realistic results. Occlusion, which merely samples the "coverage" of a point (and is cheaper than Indirect Illumination), is also supported automatically or through the PxrOcclusion Integrator.

RenderMan for Katana supports secondary outputs (AOVs, or Arbitrary Output Variables), which can be any arbitrary information contained in a shader. Users may also take advantage of Light Path Expressions (LPE) for powerful control over outputs.

RenderMan for Katana is one piece of a potentially sophisticated production pipeline. In order to get your work from script-to-screen you may need more, and that is where Tractor enters the picture. By implementing RfK in concert with Tractor and RenderMan Pro Server users can achieve a seamlessly integrated rendering workflow from desktop to renderfarm.

Tractor is a system for distributing tasks from queued jobs to a farm of execution servers, managing large queues of concurrent jobs from many users, enforcing dependencies and scheduling policies. The Tractor package includes a central queueing mechanism, a remote execution server, a monitoring subsystem, and a browser-based user interface.

Tractor is provided as a separate, standalone product, with its own documentation.