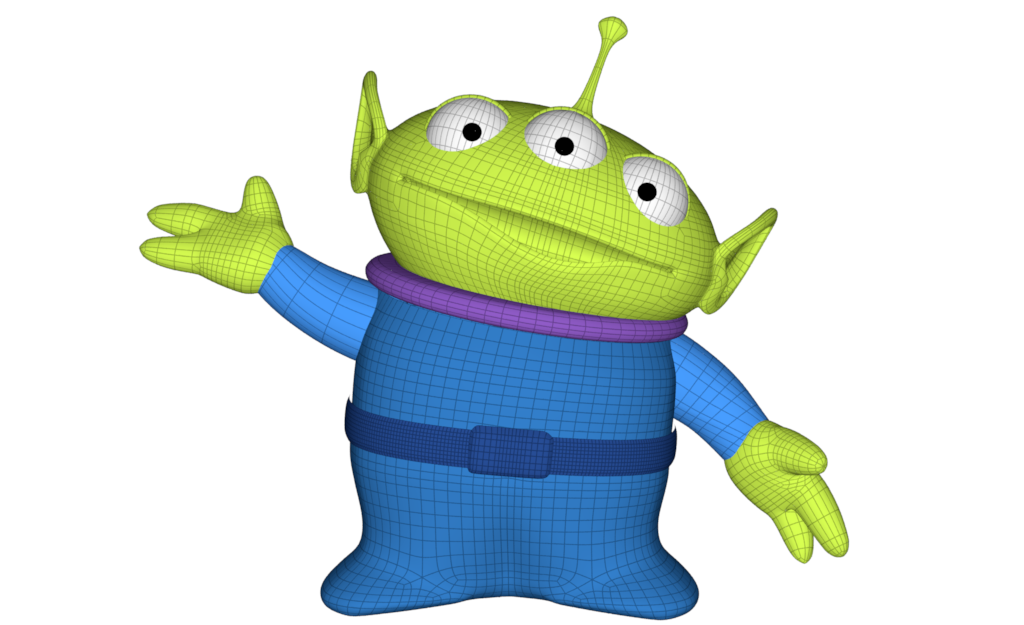 A common way to approach a subdivision surface is to imagine a polygon mesh (the control mesh) which undergoes a local averaging (or smoothing) at every vertex, creating a new set of vertices which have a smoother appearance than the original mesh. One application of this averaging operator everywhere on a mesh is a single subdivision step. If we could take an infinite number of subdivision steps, eventually we will converge to a limit surface, which has a set of guaranteed smoothness properties depending on the type of subdivision being used.

Like most other types of geometry, a subdivision mesh is described by its control mesh. Unlike NURBS, the control mesh is not confined to be rectangular, so in this respect, the control mesh is very similar to polygonal surface. But where polygonal surfaces require large numbers of points to appear smooth, a subdivision mesh's limit surface is guaranteed to be smooth - meaning that polygonal artifacts or faceting are never present, no matter how the surface animates, or how closely it is viewed.

Unlike many other renderers, RenderMan's implementation of subdivision surfaces does not apply a fixed number of subdivision steps to a polygonal mesh. Instead, it adaptively tessellates into micropolygons whose size is by default computed in term of pixels on the screen. Moreover, even if the micropolygons are large due to the micropolygon length setting, their vertices are computed directly from the limit surface for the highest accuracy.

A common question to consider when modeling assets is: should a polygonal asset be rendered as is, or should be it converted to a subdivision surface? If the asset is not smooth in nature (i.e. simple geometry with hard silhouettes), then polygons are probably all that are needed. If the asset is meant to be a smooth surface, then the tradeoffs become more complicated:

In order to provide the smoothest possible limit surface, the averaging behavior of a subdivision surface is such that the limit surface "pulls away" from the boundaries of the control mesh by default. This can be undesirable when dealing with non-closed meshes, especially those that need to connect seamlessly with other adjoining meshes. As a convenience, RenderMan provides boundary interpolation rules that allow this behavior to be overridden, allowing the surface to continue all the way to the boundary of the control mesh. Different rules allow for smooth or sharp corners (vertices which have exactly two incident edges). The example below shows the boundary interpolation rules applied to a simple 9 face control mesh.

This idea of boundary interpolation can also be extended to the interpolation rules applied when dealing with data over the surface, most notably texture coordinates (in this context, RenderMan uses the term facevarying boundary interpolation). When dealing with the seams between disjoint UV regions, the renderer can use several different rules, trading off smoothness of the subdivided result away from the seams against the desire to interpolate the seams exactly. Note that no matter what rule is chosen, the UV texture map editor must also abide by the same rules, otherwise undesirable texturing artifacts will result. The following image demonstrates the different rules applied to a 4x4 grid of quads segmented into three UV regions. 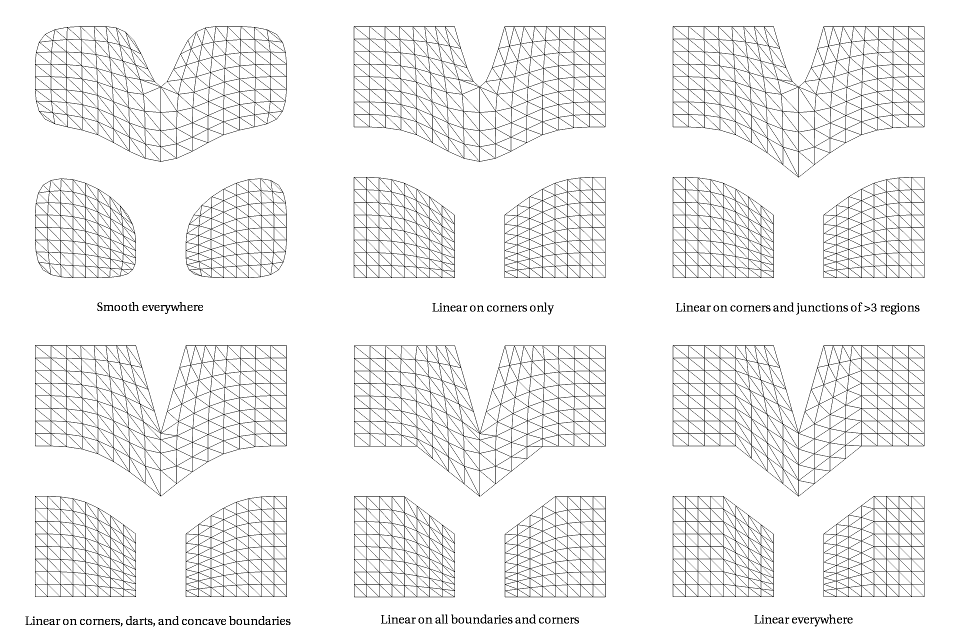