Typically users model such things by creating a boolean operation so that these surfaces never really touch one another, it's either/or and not both at the same time. This can be complicated to setup and nearly impossible when trying to use a simulation like flowing water to do this effect. So in RenderMan you can add an attribute to the shape called Intersection Priority. It's a simple number to specify priority where lower numbers are higher priority.

To better understand the liquid placement, below are the possible options shown in a cross section of the glass.

In the above examples, the overlapping liquid and glass is most similar to the correct method which uses overlapping but adds the Intersection Priority to the glass and liquid shapes. Notice the change in color for the liquid and how much better it captures the light and refractions. The glass has an Intersection Priority of 1 while the liquid is 2. If we were to add ice cubes those would be 3. 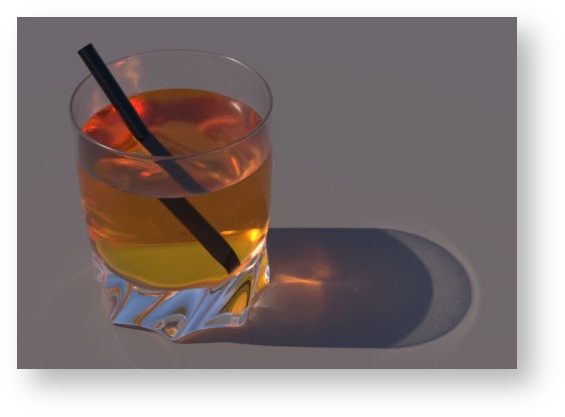 In some cases you may experience a small dark line where the geometry overlaps. To solve this you can create a Trace Bias attribute on the glass shape. By default this value is 0.0001 but can be increased in very small increments until the artifact is gone. Note that the attribute for Trace Auto Bias must be added to the object and turned off for manual trace bias settings to work unless the global setting for Trace Auto Bias is already off.