This node vertically stacks 2 materials, with the base being at the bottom of the stack, with the Top layer above it.

Material to be used as the top layer.   If no top layer is set, then the base material will be used by itself.

Material to be used as the base layer

Defines the mix between the base and top layers.   This value can either be set via the slider or B/W map, PxrPattern, or float value.

This value defines the thickness of the top layer.  This value can either be set via the slider or B/W map, PxrPattern, or float value. 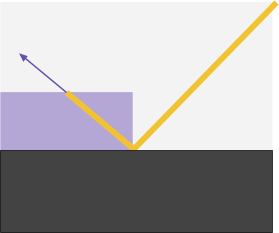 The fresnel blend layer mode performs a weighted addition of the two materials, with the base material being weighted by the top materials transmission. This ensures that energy is conserved.

This is the simplest layer mode and is very commonly used in material models. It matches the behaviour of the MaterialX layer node. 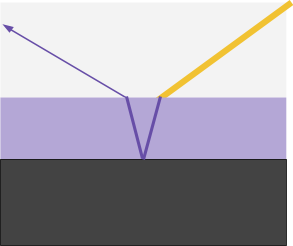 The simplicity of the fresnel blend mode means that a number of physical effects are ignored.

From a physical viewpoint, this layer mode ignores the top layer for the incoming ray, and ignores refraction of the outgoing ray. The IOR of the top layer is also ignored by the base layer, meaning that the relative IOR is incorrect unless it has been manually set.

The rough coating layer mode extends this simple model by approximating the physical effects that it ignores.

The top layer is considered for both the outgoing and incoming rays, meaning that the ray is attenuated by the top layer twice: once when it leaves and once when it exits. This is the case for both fresnel attenuation at the interface, and for absorption through the thickness of the layer.

Refraction is considered by refracting both the incoming and outgoing rays through the top layer, instead of passing them straight through as in the fresnel blend mode. This changes the look of the base layer as it receives these refracted rays. As an approximation, the top layer is considered to have a roughness of zero for the refraction calculation. This means that as the roughness of the top layer increases, the accuracy of the model decreases.

The smooth coating layer mode is very similar to the rough coating mode, but without the roughness clamping. This allows for greater control of the base layer roughness.

The auto mode is identical to rough coating in most cases, but switches to fresnel blend for diffuse layers. This is to accommodate for the common Diffuse < Specular < Clearcoat material configuration, where the diffuse and specular materials are thought of as one single base material, with the clearcoat sitting on top.

These images show a collection of simple and common material configurations, inspired by   Weidlich and Wilkie's arbitrarily layered micro-facet surfaces . These have been rendered with both the fresnel blend mode, and rough coating mode.

These images show a smooth gold base layer with a bump mapped dielectric with absorption.

The absorption also works differently, giving less variation in colour across the surface in the rough coating case. This is because the refraction causes the distances that the rays travel between the top layer and base layer to be compressed into a smaller range.

We can also see that in the rough coating image, the base layer reflection is much more diffused, this is due to the scattering of rays through the top layer, which is achieved by the roughness approximation.