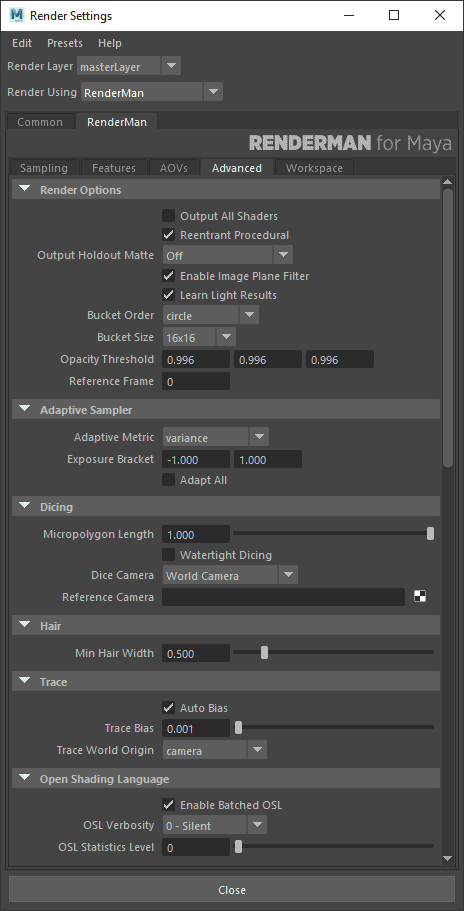 Output All Shaders: Typically we export only material networks attached to objects, but if you're shading a procedural it may not be connected in a way that is exported. This option will export all networks regardless.

Reentrant Procedural: This allows procedurals to run simultaneously in multiple threads and greatly speed up renders with procedurals (hair). You most likely want to leave this on.

Opacity Threshold: Controls the Opacity Threshold, if set too low, it may terminate rays early on semi-opaque objects. An objects opacity is controlled by the material Presence parameter and depth in supported integrators.

Adaptive Metric: Make use of the improved Variance sampling algorithm as the default. You can use the Contrast-V22 metric as the older technique to match previous renders. The new technique improves the consistency of noise frame to frame. Extra options may be visible for each selection.

Enable Batched OSL: Enable performance improvements on batched shading points through vectorized instructions on supported hardware. (Available on machines with a minimum of support for Advanced Vector Extensions (AVX). Additionally, it can take advantage of the 512-bit wide datapaths on machines that support Advance Vector Extensions 512 (AVX-512). This is on by default

OSL Verbosity: Valid in ranges of 0 to 5 with 5 having the most messages. See the OSL documentation for more information.

OSL Statistics Level: As above, valid in ranges of 0 to 5 with 5 having the most messages.