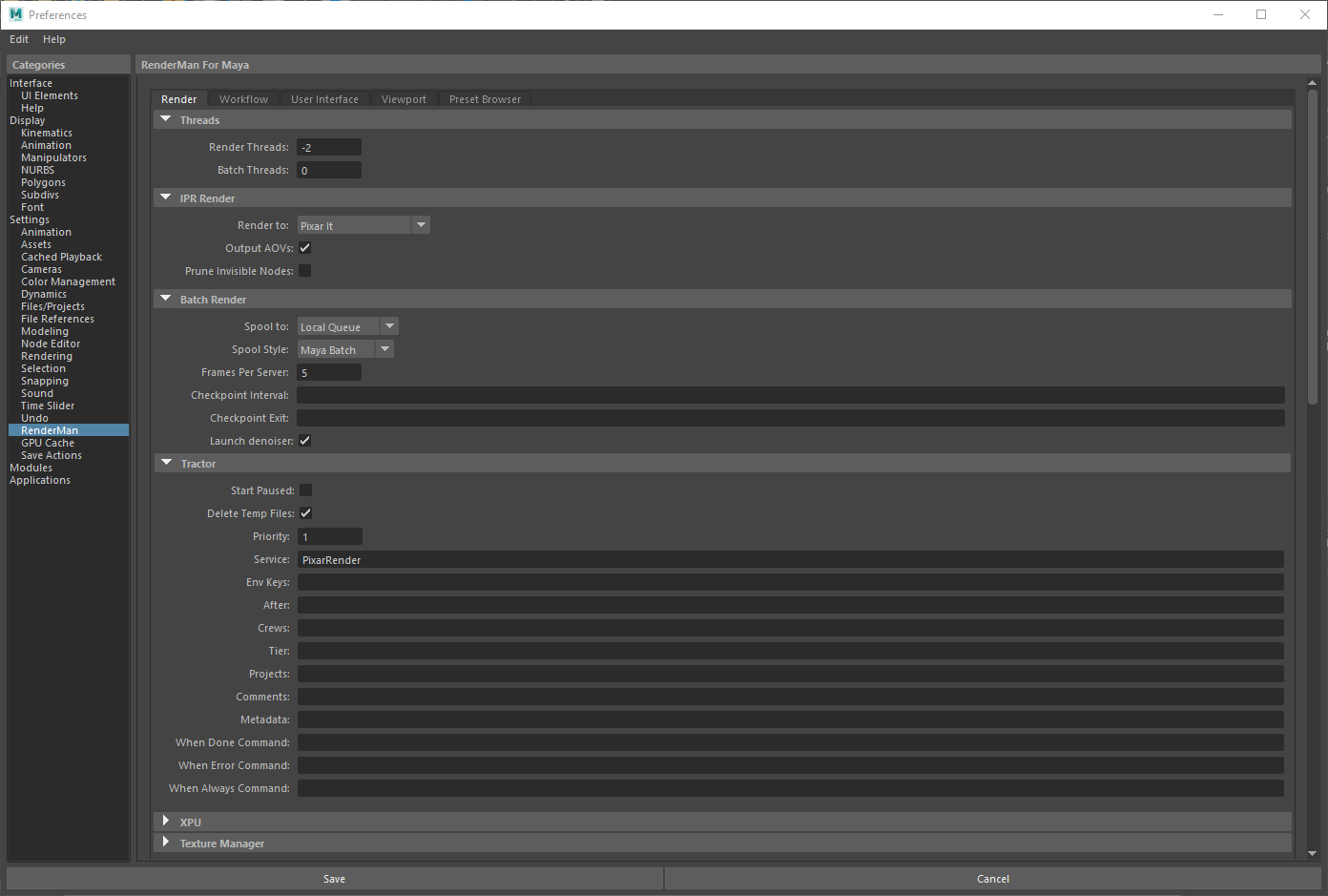 The number of threads to use for preview or IPR renders. A value of 0 indicates that all processors will be used. Negative values indicate all processors minus the specified number will be used. The default of -2 allows the user interface to remain responsive during continuous rendering.

The number of threads to use for batch renders.

The display to use for IPR renders. Choose "It" or Render View.

Write out AOVs/LPE during interactive sessions. This is off by default to improve performance.

During IPR we only prune templated nodes, allowing other objects to be interactively hidden/unhidden. However, to save translation time you can tell RfM to also prune hidden nodes during IPR.

Chose between LocalQueue and Tractor. There is a separate section below for Tractor queuing settings.

How many frames in a chunk/at a time in sequence on a remote server. The default is 5.

Use checkpointing in a batch render, choosing the number of minutes or iterations before a checkpoint is written. You can control this option using the same syntax found in the Checkpointing Document under "How to Specify". You may specify anything from individual render increments to seconds, minutes, hours, and days. As well as specify an exit time after a checkpoint time or an exit alone without the checkpointing at a given time. The help text popup over the field provides examples, such as: 5m,1h says create a checkpoint every 5 minutes and exit at 1hour, writing the final result.

If deselected, the denoise operation will not launch, you can run the denoiser tool after the image is written manually. Note the display driver in the render settings must be set for denoising.

Remote queuing settings only apply to Tractor, for LocalQueue all settings are applied locally.

Send the job to Tractor but do not begin the job immediately. Requires manual or scripted start.

This affects how active jobs are assigned to remote servers. It doesn't affect position in the dispatcher queue.

Additional service selectors for the job

Switch between preset configurations. The JSON pref called DefaultEnvKey specifies the default value seen here. Multiple keys can be specified and should be space separated.

These environment keys are recognized by LocalQueue and Tractor:

Additional job comments from the user

Data added to the job for your pipeline processing.

A command that should be executed when the job is finished

A command that should be executed regardless of job error status

Choose devices to be used by used XPU

The number of parallel processes txmake uses to process texture files. The default is 2. We suggest leaving the default unless you have more than 8 physical cores available on your CPU configuration.

By default we write .tex files to the Images project directory. If this fails (it doesn't exist or there are permissions issues) use the specified folder here. Do not use spaces or diacritics in your path text.